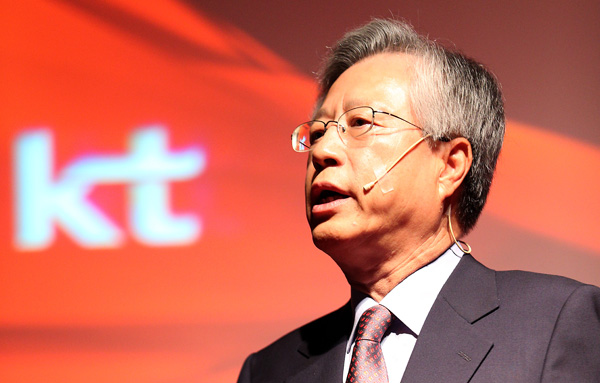 
KT, the No. 2 mobile service operator, said yesterday it would dedicate a total of 100 billion won ($90 million) to creating a media content business with participation from various investors by the end of this year and run it for the next three years.

The decision follows the company’s announcement earlier this year of a shift in focus from landline and mobile telecommunications, which has reached a saturation point in terms of revenue growth, to a new business area that will encompass animation, games and music.

KT will set aside 20 billion won, or 2 percent of its annual revenues from its media businesses, for the fund and will also enlist outside investors. It will establish an investment review committee for the fund, whose members will consist of its own employees as well as experts from the outside, including TV manufacturers, broadcasting companies, independent content creators and entrepreneurs interested in the Korean wave of cultural exports, or hallyu.

Lee also said the company would expand the kind of content and applications it’s developing, which is currently confined to mobile devices, to TVs.

“I myself use smartphones to consume entertainment in most cases and only when time allows do I listen to music or view media content using tablet PCs,” he said at a press conference yesterday at the company headquarters in Gwanghwamun, central Seoul. “But I have also found it a little tiring to enjoy the content solely with mobile gadgets. The best platform, we have concluded, is TV, and that’s why we are developing content for TVs.”