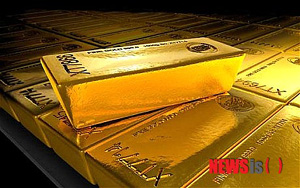 Korea ranked 40th in gold holdings as of end-August, up three notches from two months earlier as its central bank purchased the precious metal to diversify its foreign exchange reserves, data showed yesterday.

Korea’s gold holdings reached 70.4 tons valued at $2.98 billion as of end-August, accounting for 0.9 percent of the country’s total foreign reserves of $316.88 billion, according to the World Gold Council, an international body that offers key information about gold.

The Bank of Korea bought 16 tons of gold in July, the third purchase of the precious metal since the central bank bought it in July last year for the first time in 13 years.

Gold is also viewed as a way to hedge inflation.

The Federal Reserve’s fresh bond-buying program jacked up prices of gold to a near seven-month high on Monday as investors flocked to the safe asset on concerns about inflation.

The BOK has intensified its move to diversify its portfolio of the foreign reserves by cutting the portion of dollar-denominated assets and purchasing gold.

The central bank has declined to comment on future gold-buying plans, citing their possible impacts on the market.