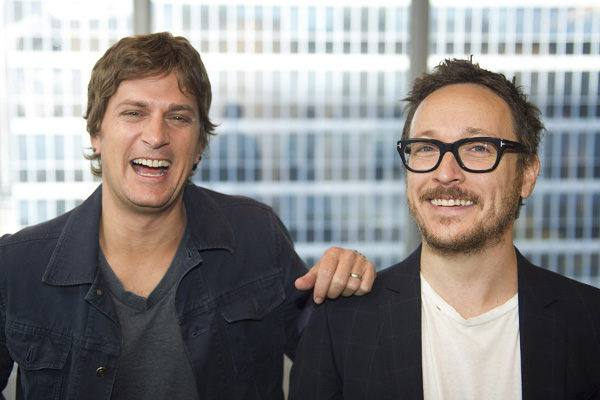 NEW YORK - The recording process for Matchbox Twenty’s new album was somewhat like living in a frat house, with tons of red wine instead of beer.

While creating “North’’ and living together in Nashville, lead singer Rob Thomas jokes that the foursome “spent, like, $40,000 on wine. Just on the wine.’’

“At 5, 6 o’clock, we’d break for dinner and things would just go south,’’ Thomas, 40, said in a recent interview. “And we would think it was awesome, everything we were doing was awesome, and we’d come back in and we would meet some new band out in the middle of Nashville and bring them back to the studio .?.?. and play all this crap. I know they walked away going, ‘Dude, the new Matchbox Twenty record is going to suck.’?’’

None of those songs made it on the album “North,’’ which may be part of the reason it debuted at No. 1 on Billboard’s 200 albums chart last week after selling 95,000 copies, according to Nielsen SoundScan. The rockers recorded the album, their first release since the 2007 compilation album “Exile on Mainstream,’’ in New York, Los Angeles and “in the woods’’ of Nashville. They hadn’t lived together since they recorded their 12-times platinum 1996 debut, “Yourself or Someone Like You.”

But they said reuniting felt “natural’’ and the musicians began writing material while Thomas toured his second solo album in 2009. Paul Doucette, the band’s drummer, said they recorded more than 60 songs, and selecting the final tracks was tiresome.

Thomas added: “Not to mention you’d pass out and you’d wake up the next day and somebody would come in and be like, ‘I turned it into a ragtime record’?’’

The Grammy-nominated band - which includes guitarist Kyle Cook and bassist Brian Yale - said being in Nashville did influence their sound, though they ditched it toward the end: “We kind of decided that wasn’t the record that we were making.”