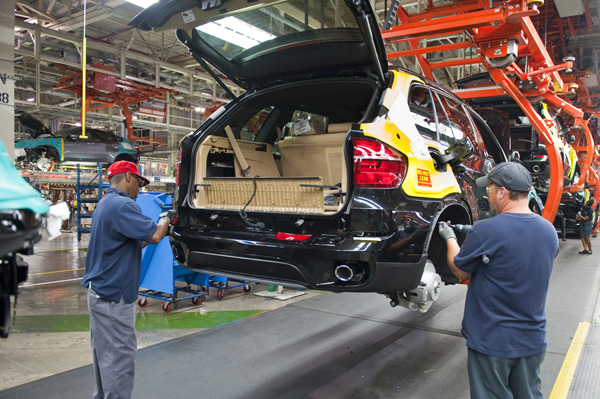 BMW’s employees work on an SUV at an assembly line in the company’s plant in Spartanburg, South Carolina. Provided by the company


SPARTANBURG, South Carolina - After the free trade agreement between Korea and the United States went into effect in March, automakers have been trying to reinforce their supply of U.S.-manufactured models. BMW, the nation’s best-selling foreign auto brand, is no exception.

Not all BMW models that Koreans see on their streets are imported from Germany. Currently, the automaker’s X3 and X5 Sports Activity Vehicle and the X6 Sports Activity Coupe are shipped from the U.S.

In the near future, Koreans may see more such vehicles as BMW’s U.S. factory aims for sustainable growth with its eco-friendly measures at workplaces.

“Our group’s objective is to become the most sustainable company in the automotive industry,” Josef Kerscher, president of BMW manufacturing in North America, told reporters on Monday. “We are becoming a role model for U.S. companies.”

Its plant in Spartanburg, South Carolina, is the production home of the German automaker’s X Series, except for the X1 models. The factory, which is the first full manufacturing facility outside Germany and also its first production facility in the U.S., recorded the fastest factory start-up time in automotive history after it took just 23 months from groundbreaking in September 1992 to producing its first vehicle on Sept. 8, 1994.

Now, the 1,150-acre, 4-million-square-foot campus, which is located more than an hour’s drive from Charlotte, is on its way to becoming the company’s largest producer.

Last year, the plant churned out 271,065 vehicles, 73 percent more than in 2010, but still ranked behind BMW’s Dingolfing plant in Germany.

The plant has 7,000 employees, but its work force is expected to reach 8,000 within three years. 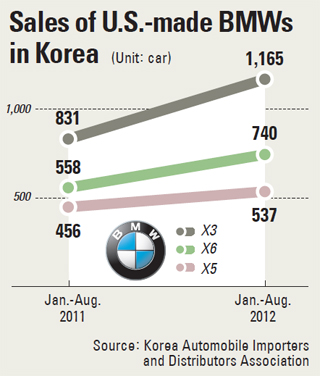 The factory rotates between two 10-hour shifts and three eight-hour shifts a day, and employees rarely build the same car twice as 80 percent of the vehicles produced there are customized for individual customers.

Positions on the line are rotated to reduce repetition, as well as being used for cross-training to prevent injuries. But what makes the factory more valuable for the group and perhaps the auto industry as a whole is that it has been carrying out eco-friendly measures.

It is powered by two turbines fueled by landfill methane, which provide half of the plant’s total energy requirements.

This also reduces the plant’s carbon dioxide emissions by around 92,000 tons and saves it $5 million in a year.

Since 2006, the plant has decreased its water use by 51 percent, energy consumption by 46.9 percent, air emissions by 25.7 percent and waste disposed of in a landfill by 65.5 percent.

In addition, it was the first automobile manufacturing plant in the U.S. to use water-based paints instead of high solvent-based ones.

The facility, which will soon start pumping out the new X4, is trying to use hydrogen fuel cells to power some of its equipment.