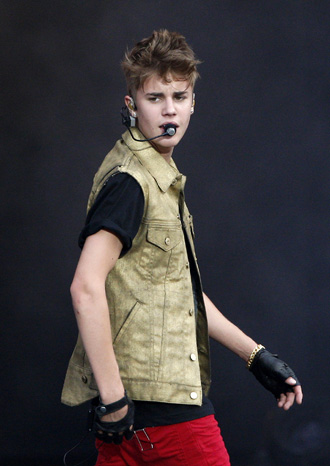 LOS ANGELES - Justin Bieber topped Billboard’s “21 Under 21” list of the world’s top young musical acts for the second year in a row, fending off stiff competition from British boy band One Direction.

Bieber, 18, “remains more powerful in the pop universe than ever,” Billboard said, having released two No. 1 albums in the last year - the holiday set “Under the Mistletoe” and his latest pop album “Believe.”

“Bieber is the supernova of teen pop stars with charisma, popularity and swagger to spare ... it’s Biebs’ world, and we’re lucky to live in it,” Billboard said.

One Direction, whose five members range in age from 18 to 20, burst onto the U.S. pop scene six months ago after soaring to success in their native Britain. Managed by TV entrepreneur Simon Cowell, One Direction made history in March as the first U.K. group to debut at the top of the Billboard 200 chart with its first album.