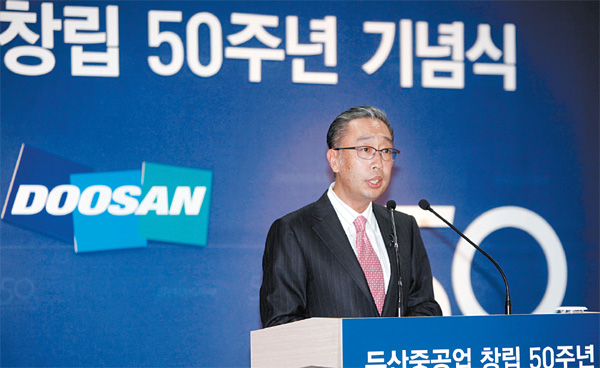 Park Gee-won, chairman and CEO of Doosan Heavy Industries & Construction, gives a speech yesterday on the company’s 50th anniversary at its headquarters in Changwon, South Gyeongsang. Provided by the company


Marking the 50th anniversary of its founding today, Doosan Heavy Industries & Construction aims to make another significant leap as a first mover in the global power-generation market with top-tier technologies.

Established in 1962 in line with the government’s policy of promoting heavy industry, Doosan Heavy has been a leading force in the country due to its original technology for manufacturing power generators and related facilities, and its construction of seawater desalination plants.

Although it has been one of the fastest-growing businesses in the country over the past half-century, it still trails multinational groups like Siemens and Mitsubishi.

Now it wants to secure its legacy over the next 50 years as it looks to expand its global reach with competitive products and technology.

Park Gee-won, its chairman and CEO, pledged to pave the way for the company’s longevity at a ceremony at the company’s headquarters in Changwon, South Gyeongsang, yesterday.

“In order to maintain sustainable growth for more than 100 years, strong competitiveness in our products and technology are essential to achieve the goal,” Park said.

Despite gloomy outlooks for the heavy industrial arena amid the global economic slump, the major cash cow of 116-year-old Doosan Group looks to have a bright future based on the two growth pillars of power and water plants, he said, as demand for these will continue to grow.

“As there are increasing problems in supply and demand of power nowadays, Doosan still has a lot of work to do,” he said in a recent interview with the local press.

The company is targeting orders of 10.8 trillion won ($9.69 billion) this year but only reached 30 percent of this in the first half due to the drag caused by the euro zone debt crisis and the global slowdown.

However, as major contracts worth some 7 trillion won are expected to be sealed in the second half, the company expects to reach its target. It also plans to stay competitive in the global power-generation market by aggressively chasing mergers and acquisitions. Last year, it acquired India’s Chennai Works, which makes boilers, and Germany’s power facility builder AE&E Lentjes. By taking over the Indian company, Doosan has secured a bridgehead to the world’s largest market for thermal power generation, while also being able to acquire eco-friendly technology to build power facilities from the German firm.

“The Indian market will be another major field for Doosan, along with the Middle East, as we are expanding production facilities with a 300 billion won investment,” said Suh Dong-soo, vice president of the power unit.

The company proved its technological capability more than 30 years ago when it first received an order for power generators from U.S. industrial infrastructure giant General Electric in 1976.

However, it has been less than two decades since Doosan began exporting power facilities, and it first ventured abroad to build plants in 2001, when it was privatized and returned to Doosan Group.

“The company’s technological prowess, especially in the field of nuclear reactors, already outstrips its advanced global rivals, but we need to hone other existing technologies further to transform them into top-tier technologies,” Suh said.

Since it first advanced into the seawater desalination business in 1978, Doosan remains the unchallenged global market leader.

Last year, it was awarded the world’s largest desalination plant by Saudi Arabia, which will be able to produce daily water for 13,000 people. It is now constructing desalination plants in six countries including Kuwait and the United Arab Emirates.

“It is crucial that we maintain our corporate culture of valuing people to achieve sustainable growth for more than 100 years,” he said.

The company has been running various educational and corporate social responsibility programs for its employees and the general public.