Samsung fails to get tab ban revoked in U.S.

Samsung fails to get tab ban revoked in U.S. 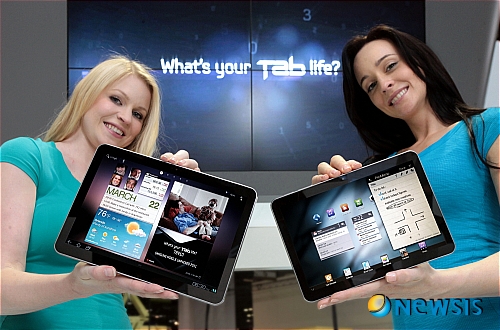 A U.S. District Court applied the sanction on June 27 on the grounds that the Samsung device copied its Apple counterpart. In the latest ruling, U.S. District Judge Lucy Koh cited a lack of jurisdiction to overturn the decision, meaning the court must await a mandate from the Federal Circuit before it can consider lifting the ban.

“Under all circumstances, Samsung’s motion raises a substantial issue, and the Court therefore issues such an indicative ruling,” Koh wrote, adding that axing that ban would have to wait “until and unless the Federal Circuit returns jurisdiction to this court.”

The two tech kings were scheduled to attend a hearing in the San Jose courthouse today but Koh cancelled the event and refrained from setting a new date. Amid the escalating patent battle over mobile devices between Samsung and Apple, a California court jury ruled on Aug. 24 that Samsung infringed on six of seven Apple patents, awarding the U.S. tech titan $1.05 billion in damages.

Samsung’s Galaxy Tab 10.1, a leading challenger to Apple’s iPad, was found not to have violated its D889 design patent. Samsung filed to dissolve the injunction immediately after the verdict was delivered.

The dispute surrounding the Galaxy Tab 10.1 dates back to July of last year, when Apple sought to bar the Android-powered device’s sales in the United States. Koh declined to grant the injunction in December, concluding that allowing the tablet to remain in the U.S. market would not harm Apple enough to justify the order.

Apple challenged the decision in April, and in June the Court of Appeals for the Federal Circuit sent the design-related patent case back to the district court, prompting the ban. Another court hearing is scheduled on Dec. 6, when Apple’s request for a permanent U.S. sales ban on eight of Samsung’s smartphones and tablet PCs will be deliberated.