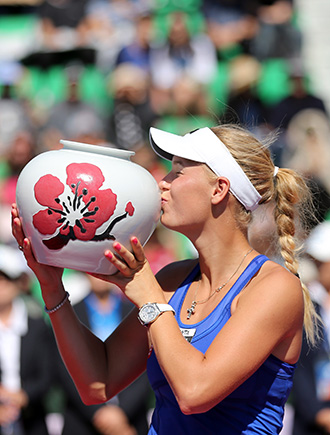 Caroline Wozniacki kisses the trophy after winning the KDB Korea Open in Seoul, yesterday. She beat Kaia Kanepi of Estonia 6-1, 6-0 in the final.[YONHAP]

Top-seed Wozniacki easily beat third-seed Kaia Kanepi of Estonia 2-0 (6-1, 6-0) in the final of the KDB Korea Open to capture her maiden win at the only WTA-sanctioned event in Korea.

“So proud of @CaroWozniacki!! Great win in Korea!” Mcllroy, 23, currently ranked as the world’s No. 1 golfer, said in his tweet.

Wozniacki, 22, who had kept the world’s No. 1 rank for 67 weeks until January, entered the KDB Open as the 11th highest ranked player in the world. With 280 points at the Seoul event, her ranking could return to the top 10 in the upcoming WTA list to be released today.

“Number 19 and counting!” Mcllroy, who himself was bidding to win a third straight PGA event at the Tour Championship in the U.S., tweeted, referring to Wozniacki’s 19th career WTA title.

It is her first victory since winning the New Haven Open held in the U.S. in August of last year. She finished runner-up in the Copenhagen Open in April, where she lost to Germany’s Angelique Kerber 6-4, 6-4.

“I just want to build up for next season,” Wozniacki told reporters after yesterday’s final, according to Reuters. “And it’s been a long season so I want to have a holiday and relax.

“I don’t think about rankings. I’m just happy I won the tournament. I would like to enjoy that. I want to be positive, and that’s what I’m thinking about right now.”

Wozniacki booked a berth to the final after beating the eighth-seeded Ekaterina Makarova of Russia 6-1, 5-7, 6-4.