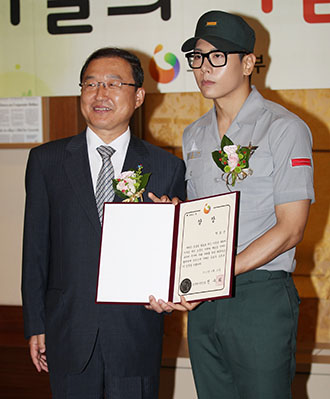 Singer Park Hyo-shin was discharged from the Army on Sept. 24 at a ceremony that took place at the organization’s PR branch in Yongsan District, central Seoul.

After some 21 months of serving the nation, Park was welcomed back into society by a throng of press and fans.

Other singers belonging to his agency, including newbie band VIXX, also turned up to congratulate the 30-year-old singer.

When quizzed about his plans, Park said he’d like to take some time off before returning to the music scene.

As is customary, the entertainer was asked which girl group member he’d most like to meet.

Although Park said he isn’t picky, if he had to choose, he said, “It’d be nice to see Sooyoung from Girls’ Generation in the flesh.”

Park explained he had been following her on TV shows while serving.