Hashimoto and Ahn a study in contrasts

Hashimoto and Ahn a study in contrasts 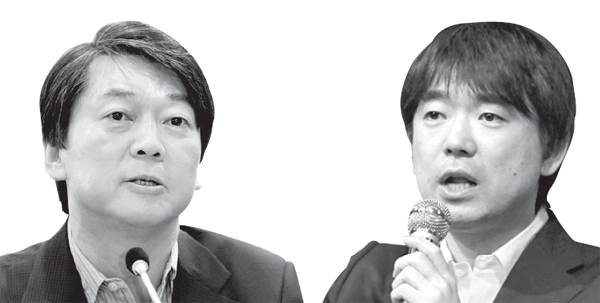 On Sept. 12, Osaka Mayor Toru Hashimoto hosted a fund-raiser to announce the launch of the Japan Restoration Party. As the next general election is likely before the end of the year, the 43-year-old politician dreams about making a sensational splash. “I am so glad so many people have come. Two years ago, who would have known the city of Osaka and the Osaka Prefecture are merged? Newspapers, television, intellectuals and political commentators are all fools. They cannot predict two years ahead, so how can they discuss Japan three, four decades into the future?”

He began his speech by highlighting his construction of Create Osaka and crushing of the media. Casually dressed with no tie, Hashimoto constantly shook his body. He was not reading from a script, and for 23 minutes he staged a one-man show in his signature condescending tone. He had seven politicians brought in from other parties line up on the stage as if they were trophies. Hashimoto shouted, “I will make a new way for Japan.” Pointing at the logo of his new party that has a map of Japan, he claimed that the map includes the Dokdo islets and Senkaku Islands, which in reality are not shown. This is how Japan’s Ahn Cheol-soo signaled his entry into national politics.

A week later, Ahn announced his candidacy in Seoul. And it was completely different from Hashimoto’s loud announcement. Smartly dressed and wearing a tie, he spoke calmly, reading from the prompter. He sounded more determined and firmer than usual. But his signature image of down-to-earth character, gentleness and a hint of amateurism was still evident.

Hashimoto is considered Japan’s Ahn because he advocates “farewell to outdated politics” and represents “extreme dissatisfaction toward existing politics and parties.” However, their styles and methods are completely different. Hashimoto’s dream is to exploit the weakness of Japanese politics, where the prime minister changes every year as a result of endless political strife. With his excessively macho attitude, he is trying to give an impression of a “strong leader.” He has created virtual enemies, such as “the lawmakers who waste budgets without doing their jobs,” “the leftist teachers who lack patriotism and do not raise the national flag,” and “the Osaka City Hall employees with tattoos.”

To Hashimoto, politics means endless struggle and war. His approach is diametrically opposed to Ahn’s philosophy of “integration rather than division” and “horizontal leadership rather than sole leadership.” Their challenges have just begun. As they pursue their visions in completely different means and styles, who will be the one to smile in the end?

* The author is a Tokyo correspondent for the JoongAng Ilbo.