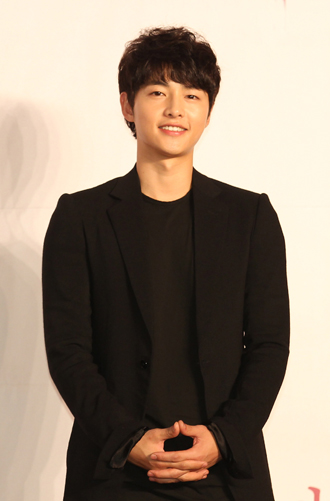 Song Joong-ki’s film “A Werewolf Boy” has been invited to the Open Cinema segment of the 17th annual Busan International Film Festival.

In August, the movie director Jo Sung-hee secured an invite to the Toronto International Film Festival and screened under “Contemporary World Cinema.”

The love story between a reclusive girl and a werewolf was also invited to the Vancouver International Film Festival, where it screened under “Dragons & Tigers.”

The celebrated film starring Song will open in cinemas in Korea next month.

Song made his debut in 2008 in the movie “Ssang-hwa-jeom” (“A Frozen Flower”) and rose to fame last year in the role of the young King Sejong in the SBS drama “Deep Rooted Tree” and in “Penny Pinchers.”

Currently, the 27-year-old is starring in the drama “Innocent Man” alongside Park Si-yeon and Moon Chae-won. In the drama, Song plays an “innocent man” who becomes jaded when he takes the blame for his lover’s crime, only to find out that she betrayed him.