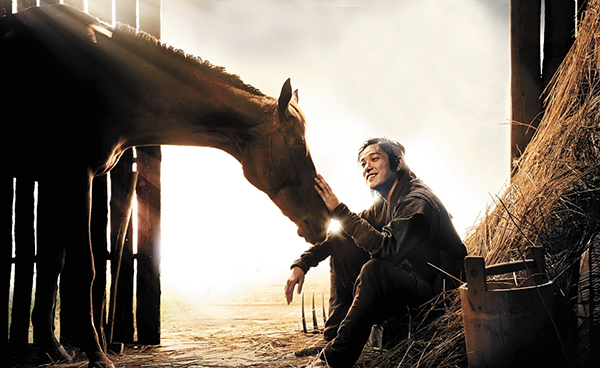 Jo Seung-woo, who’s been dominating films and musicals, will appear in a drama series - “Horse Doctor” - for the first time in his 13-year career. Provided by MBC


The name Jo Seung-woo should ring a bell, even for someone only mildly interested in the Korean entertainment industry. He has starred in such films as “The Classic” (2003), “Marathon” (2005), “Tazza: The High Rollers” (2006) and “Perfect Game” (2011), not to mention musicals like “Hedwig and the Angry Inch” and, most recently, “Doctor Zhivago.”

Given that kind of award-winning track record, there is little reason for Jo to venture into a new genre.

In addition, Korean drama production is notorious for grueling schedules, with most actors and actresses saying they hardly sleep when shows are being shot. About a year ago, actress Han Ye-seul even boycotted filming of the drama series “Myung-wol the Spy.”

For the first time in his 13-year career, however, Jo will star in a TV drama - MBC’s “Horse Doctor.” The series is based on the veterinarian Baek Gwang-hyun of the Joseon Dynasty, who specializes in treating horses and rises to become the physician for the king.

“I will do my best to keep the audience captivated all throughout the 50 episodes of the drama,” said Jo during a press conference last week on location in Yongin, Gyeonggi.

After his movie debut in director Im Kwon-taek’s “Chunhyang” (1999), Jo focused solely on movies and musicals.

Ever since his 2005 award-winning breakthrough film “Marathon,” in the role of an autistic man determined to finish a marathon, Jo has topped box office charts with movies such as “Perfect Game” and “Tazza: The High Rollers.”

Having grown up in a musical family, he always dreamed of tagging along with his father, who was a singer, and sister, a musical actress.

His appearances in the musicals “Jekyll and Hyde,” and “Doctor Zhivago” had fans scrambling to find tickets. There were even Web postings on how to get tickets for Jo’s musicals because they typically sold out in a couple of hours after going on sale.

But now, many wonder if he will be able to replicate that success on television with his first drama role in “Horse Doctor.”

“Dramas make you too busy. You can’t sleep or eat, and I thought that I wouldn’t be able to stick it out. But I’ve always promised myself that if I were to do a drama, I would work with Lee Byeong-hoon, who had directed ‘Hur Jun,’?” said Jo.

The drama series “Hur Jun” (1999-2000) chronicles the life of Hur, who was a physician during the Joseon Dynasty and is considered to be one of the well-made period dramas. Lee also was at the helm of another hit period drama, “Dae Jang Geum” (2003-2004).

When it came to “Horse Doctor,” Jo’s fans also encouraged him to take the part. “I am a regular customer at restaurants in Sindang-dong and Hyehwa-dong, and the owners have always asked me to appear in dramas. Fans have also said that they wanted to see me on a regular basis, so even though my body would suffer, I decided to give it a try,” Jo said, with a laugh.

Jo said he also was attracted to a story that develops around the relationship of a human to a four-legged animal.

“I liked that the drama shows the spiritual union between humans and animals. I want to show that the character Baek Gwang-hyeon is a humanistic person determined to heal anything that is sensitive and has emotions,” he said.

Director Lee also had some praise for his star. “I saw Jo for the first time in 1999 when I was filming ‘Hur Jun’ and he was down in Namwon [North Jeolla] for his movie, ‘Chunhyang,’?” said Lee. “I found out that he was a warm and gentle actor, so I called him a few times for some work. No matter what, humanism is an important factor in dramas and I believed that Jo was the perfect actor to take on the role of the caring character Baek.”

“Horse Doctor” aired for the first time on Monday.