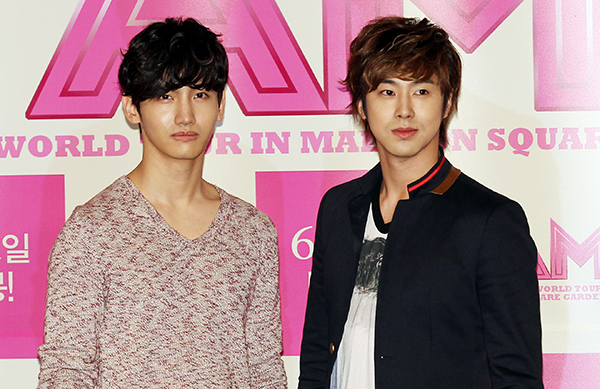 
TVXQ’s title track “Catch Me” from the duo’s sixth album recently got some air time on the U.S. talk show “Live! with Kelly & Michael.”

SM Entertainment announced on Tuesday that the new song was chosen as the opening track. Hosts Kelly Ripa and Michael Strahan danced to the tune in front of a cheering audience, a level of recognition that SM described as being “remarkable” as the band has not yet started promoting the album, which was released on Sept. 24.

“The song was casually introduced to the American public through the show,” said a spokesperson for the boy band.

The daily show on ABC airs from Monday to Friday at 9 a.m. and is one of the most watched program in its time slot.

Meanwhile, the album topped various online music charts including the Hanteo Chart as of Tuesday.

The band is preparing to debut some tracks from the album on KBS 2TV’s “Music Bank” tomorrow, it said.