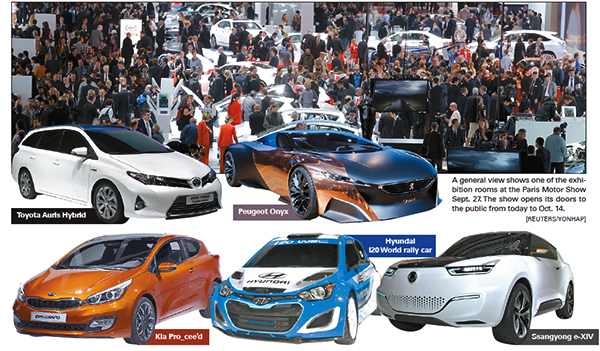 A general view shows one of the exhibition rooms at the Paris Motor Show Sept. 27. The show opens its doors to the public until Oct. 14. [REUTERS/YONHAP]


The 2012 Paris Motor Show kicked off last Thursday in the gloomiest economic times in memory, but carmakers still tried to excite consumers with new models and concept cars.

The show, which is held every other year alternating with the Frankfurt Motor Show in Germany, will be open until Oct. 14 at the Porte de Versailles Exhibition Hall. This year’s slogan is “The Future, Now.”

The show is attended by more than 253 auto-related companies from 20 nations. Some 100 models, including 33 new cars, will be displayed.

The show usually offers automakers’ fanciest and most eye-catching vehicles. But this year, as austerity sweeps across the continent, there is less emphasis on luxury and high sticker prices.

According to the European Automobile Manufacturer’s Association (ACEA), new cars sales in the European Union were down 7.1 percent for the first eight months of this year compare to a year before. In August, new passenger car registrations dropped 8.9 percent, the 11th consecutive monthly decline.

French automakers are thought to be the biggest losers in this auto sales drought. PSA Peugeot-Citroen, the biggest carmaker in France and second largest European automotive group behind Germany’s Volkswagen Group, saw its sales in Europe falling 14 percent on-year in the January through August period, while the No. 2 Renault reported a 16 percent sales drop.

At the show, the French automakers mostly showcased face-lifted versions of existing models, with Renault coming up with a fourth generation of Clio, the popular city car, and Dacia Logan.

Peugeot introduced the high-performance GTi version of its 208, a compact vehicle, and rolled out its own concept supercar called the Onyx. Citroen showed a convertible version of the compact DS3 cabriolet.

German brands were more aggressive than the French.

Volkswagen introduced the seventh generation of its popular Golf model, while BMW highlighted its 1 Series and Active Tourer concept car and Mercedes Benz unveiled an electric-powered and natural gas-fueled B-Class. Audi showcased its latest A3 models.

The trend of small and environmental-friendly cars was obvious.

Hyundai Motor, Korea’s largest automaker, highlighted a three-door version of its i30. The compact vehicle, which is set to go on sale in upcoming months in Europe, was strategically developed to target the small car market.

The automaker also introduced the ix35 Fuel Cell, a hydrogen-powered sports utility vehicle, and an i20 world rally car.

The ix35 Fuel Cell is expected to hit the market in December after being manufactured in the company’s Ulsan plant. The company is planning to sell 1,000 units worldwide until 2015 and mass-produce the vehicle with an annual capacity of 10,000 units.

“The three models that Hyundai introduces in this motor show reflect the company’s deep caring for the customer, the environment and the European market,” Kim Seung-tak, the director of global sales and marketing at Hyundai, said. “We will try our best to drive the auto industry by reflecting customer’s needs and preferences in our products.”

Hyundai’s affiliate Kia Motors showcased the new generation of its Pro_cee’d with a three-door hatchback model and RP, a multi-purpose vehicle. The New Sorento R, an SUV, was also first introduced in Europe.

“Kia sold some 225,000 vehicles in Europe till this August, which was 23 percent on-year growth compared to last year,” Oh Tae-hyun, Kia’s head of global sales and marketing, said. “We will do aggressive marketing with the introduction of new cars and aim to enter the top 10 auto brands of Europe.” GM Korea, the nation’s No. 3 player, demonstrated its role as the development arm for GM’s global mini and small vehicles at the auto show.

Several important products that were engineered and designed by GM Korea are being featured on the Chevrolet stand. They include the Trax, which is making its world premiere; the Chevrolet Spark, which has been upgraded inside and out; the Malibu Diesel and Orlando Turbo, which feature new powertrains and the Cruze Station Wagon, which was developed specifically for Europe.