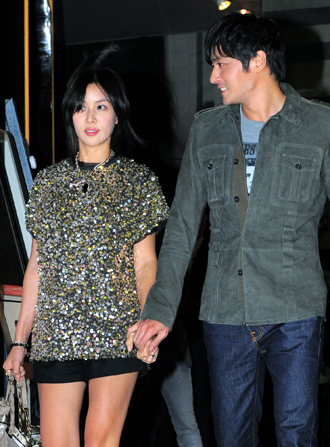 Celebrity power couple Jang Dong-gun and Ko So-young has donated 100 million won ($89,794) to the Social Welfare Society in an effort to assist single mothers and adoptees.

According to the organization yesterday, Ko has had special ties to the charity group since she first crossed paths with it in 2007 while working on a photo shoot with famed photographer Cho Sei-hon to raise awareness for the cause.

After giving birth to her son in 2010, Ko also donated 100 million won, making the latest move her third donation. Ahead of the donation on Tuesday, Jang Dong-gun showed that he was worried about the welfare of his own child as he talked about sex scenes in his latest movie “Dangerous Liaisons.”

Jang said that it was his first time taking in a bedroom scene and that he did have a few misgivings.

“[Ko] asked me if I could get out of it, so I assured her that because director Hur Jin-ho was at the helm, it would be quite tame,” Jang said.