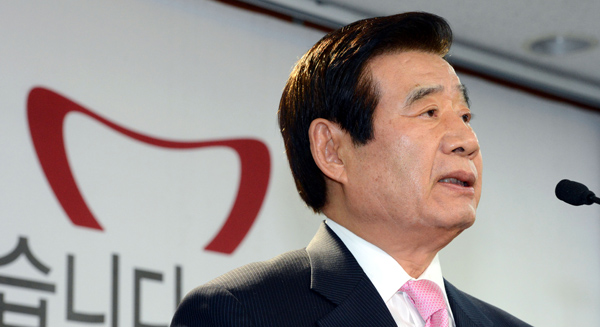 Han Gwang-ok, who served as Kim’s Blue House chief of staff from 1999 to 2001, addressed the press yesterday at the Saenuri Party’s headquarters and announced his decision to join the party. 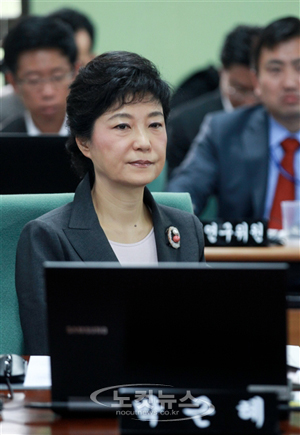 “My office is just 15 meters [16 yards] away from this building,” Han said. “And it took a real long time to travel this short distance.”

The 70-year-old politician from Jeonju, North Jeolla, once led a group of lawmakers who were rivals of the Saenuri Party.

Reminding the public of his 40-year political career, Han said he was never afraid of sacrificing himself for the greater good.

“And after long contemplation, I have decided to join the Saenuri Party to walk on another righteous path,” he said. “Regionalism is a societal evil we must never pass down to our youngsters. It is a challenge that our generation must overcome.”

Han said he decided to sacrifice himself for the ambition of Korea’s unification based on grand national unity, a key campaign slogan of Park.

“From now on, I will play a role as a pragmatic progressive inside the Saenuri Party so that it can achieve reform and innovation and win the people’s love,” Han said.

It remains to be seen if the Park campaign will actually attract voters in Jeolla by recruiting Han. He is a core member of the Kim loyalists, better known as the Donggyo-dong faction after the location of Kim’s residence, and dozens of his allies will join the Saenuri Party soon.

Han will chair the Grand National Unity committee in the Park campaign.

Han said he believed joining the Saenuri Party will allow him a better opportunity to end the perennial regionalism in the country as well as the conflicts between generations and wealth classes. “Park is a prepared candidate,” Han said. “The people are examining who can actually make her pledges real, and I believe we need a prepared president.”

Park yesterday praised Han’s decision to join her campaign. “He made a great decision to sacrifice himself and contribute to the demand of our time,” she said. “Unity and reconciliation are what our time demands, and Han agreed to the goal.”

Although Park made a bold move by recruiting a key Kim associate to revamp her popularity, not everyone in Park’s campaign was happy about the choice.

Ahn Dae-hee, a former prosecutor who was invited to chair the political reform special committee of the Saenuri Party, said he could not accept the move.

While working as a prosecutor, Ahn not only investigated the party’s election fund scandal, but also Han’s corruption.

Han was indicted and convicted of receiving bribes from a businessman in 2003 in return for using his influence to stop the shutdown of Nara Banking Corporation.

At the time, Ahn oversaw the probe as the head of the central investigation unit of the Supreme Prosecutors’ Office.