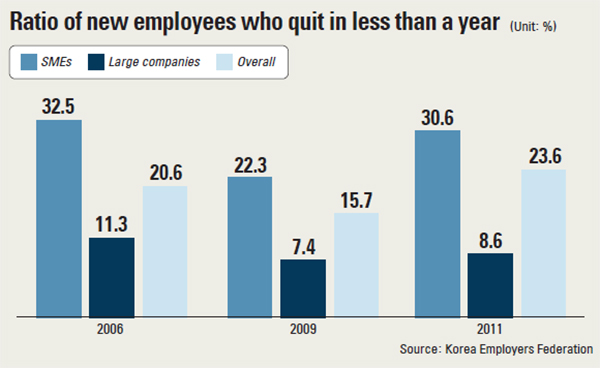 A 28-year-old with a master’s degree in economics landed a dream job at a brokerage firm in Yeouido, western Seoul. It paid more than at other companies. It had prestige.

And yet the young man quit six months later. His reasons: the hours were long, and even though older employees worked overtime with no complaints, that wasn’t the life he wanted.

“I decided to become a tax accountant,” said the young man. “The working hours are more flexible and anyway a company employee can get sacked at any time.”

The generation entering the workplace doesn’t really expect to slave away at a company as their parents and grandparents did, especially in the hard-driving working environment at small and midsized companies.

According to a recent survey of 392 companies nationwide by the Korea Employers Federation, 23.6 percent of newly employed college graduates left their jobs within the first year in 2011. The survey said new hires at small and medium-sized businesses showed a higher tendency to quit than the ones at large companies.

In addition, 7.6 percent of the college graduates failed to even show up on the first day of the new job.

The ratio of college graduates who quit their job in less than a year eased down to 15.7 percent in 2009 from 20.6 percent in 2006, the first two times the business lobbying group conducted the survey. But the trend is rising again.

“After the global crisis in late 2008 broke out, the ratio of newbies quitting their jobs started falling,” said Kim Dong-wook, managing director of the Korea Employers Federation’s economy research team. “But now the number of new employees quitting their jobs because they don’t like the work seems to be on the rise.”

More than 43 percent of the companies that took part in the survey said the biggest reason new recruits quit in less than a year is a failure to adjust to the corporate culture.

Lack of satisfaction of their pay and the location of the office were other factors.

Some companies said their new hires quit in order to prepare for the civil service exam.

Leaders of SMEs were also not as satisfied with the performance of new employees than leaders of large companies.