Dark clouds for the Saenuri Party

Dark clouds for the Saenuri Party 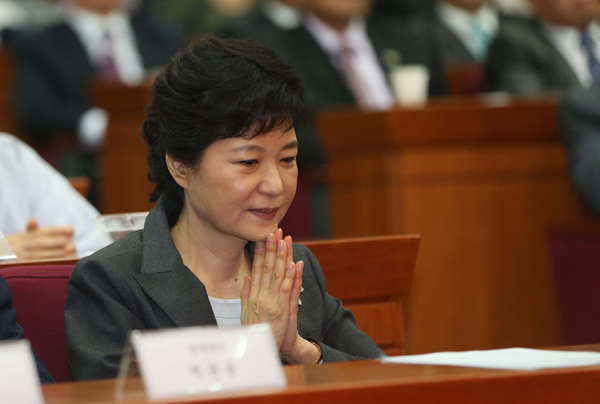 When the 1997 presidential election result came out and Kim Dae-jung was elected president on early morning of Dec. 19, over 10,000 people took to the streets of Gwangju. Pictures of people celebrating the victory covered the morning newspapers. And I still cannot forget one of them. An old man with wrinkles was crying tears of joy. It was the desperation that changed destiny, I thought. The desperation made Kim Jong-pil form a coalition with Kim Dae-jung and made Rhee In-je leave the then-ruling New Korea Party.

Kim Dae-jung won the election against Lee Hoi-chang with the slimmest margin in Korean history, winning 1.6 percent more votes. In the extremely close race, desperation tipped the scales of fate.

The 2012 election is likely to be as neck and neck as the 1997 election. The opposition candidates would unite eventually, which leaves the final question: which side is more desperate, the ruling party or the opposition?

On Oct. 3, about a dozen Saenuri Party lawmakers played golf. It was the day Park Geun-hye pleaded to “make another dash.” A reformist leader, two deputy chairmen of the presidential campaign committee, a two-time lawmaker and spokesman of the emergency leadership committee, and two former professors who got the ruling party’s nomination for the last general election were among the ruling party members on the field. The golf round may be the prelude of the cruel fate approaching Park Geun-hye and the Saenuri Party.

On Oct. 2, the Saenuri Party hosted an event marking the launch of the presidential election campaign committee. But two of the five campaign committee chairmen, Kim Moo-sung, former floor leader, and representative Kim Tae-ho, were absent. Kim Moo-sung did not receive the party’s nomination for the general election, but he called for the right wing to unite as the fate of the nation depends on the presidential election. The conservatives praised his devotion.

However, he was not in attendance because of a family trip. He compromised the fate of the nation for his family pleasure.

Kim Tae-ho was one of four primary runners and not a Park supporter. When Park Geun-hye became the ruling party’s presidential candidate on Aug. 20, he declared that he would make all efforts for victory. Five years ago in 2007, Park Geun-hye had lost the primary to Lee Myung-bak and called for unity for Lee’s victory. And Park lived up to her words. She fought off the temptation of independent Lee Hoi-chang and toured 13 cities and provinces to campaign for Lee. However, Kim Tae-ho did not even attend the launch party because of his schedule in the district.

Park Geun-hye’s support for Lee Myung-bak meant helping Lee Jae-oh, the No. 2 man in the Lee administration, as well. But Lee Jae-oh is now working outside of the party - like a far-off satellite. He is touring the four rivers on his bicycle. He is assembling people to create a constitutional revision committee when it is not clear if the Saenuri Party will be a ruling or an opposition party in the next administration.

With the leaders so uninvolved, working-level members are not at full steam. As Park Geun-hye gave a historic statement, she mispronounced the “People’s Revolutionary Party.”

Park’s aide, who is a former prosecutor, made a controversial phone call to Ahn Cheol-soo’s lawyer while riding in a taxi. The taxi driver overheard the conversation, but he lied that he was driving his own car.

Ahn may not have made up his mind to run for president before the incident. But the incident made him decide that he may actually be attacked if he remains hesitant. If Ahn supports Moon Jae-in and Moon becomes president, the aide will be remembered as someone who changed history.

Moon Jae-in’s election campaign camp is uniting. The heroes who made Roh Moo-hyun president are joining the camp one after another. Lee Jo-chul, Yang Jung-chul, Jeon Hae-cheol and many of Roh Moo-hyun’s supporters have returned.

Ten years ago, they created a promotional video for Roh, playing guitars and singing “Evergreen Tree” - a popular song for dissident groups in the 1970s. The video moved the heart of the voters who were still deciding in the last minute. Now, they are creating another impressive video for Moon about his fateful tears.

The Saenuri Party has imprudently agreed on an unconstitutional bill allowing the opposition party to recommend a special prosecutor. They were blinded by votes and virtually made the president a scapegoat. The Saenuri Party’s desperation is selfish. They do not know what it really means to be desperate.

Lee Hoi-chang lost twice because he was never desperate. The Saenuri Party seems to need more experience. When the new experience begins, Park Geun-hye would give a tearful statement announcing her retirement from politics. And the party’s lawmakers would have to find a new career as an opposition lawmaker.

* The author is an editorial writer for the JoongAng Ilbo.