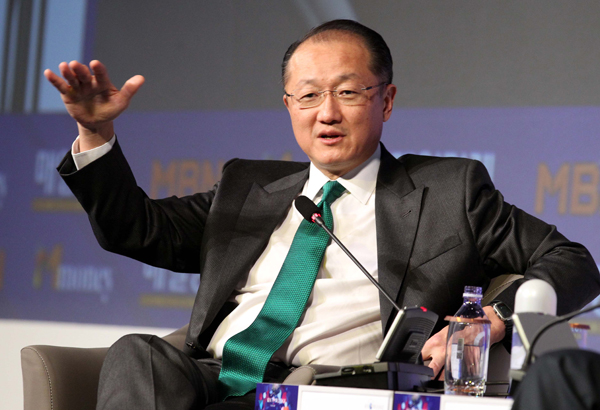 Kim, a Korean-American who was born in Seoul, visited his motherland yesterday for the first time since taking office as the chief of the international bank.

“Korea teaches us that development is possible even under the most extreme form of adversity,” Kim said. “This lesson is more relevant today than ever.”

He said he hopes to work together with the Korean government to develop effective ways of tackling poverty around the world.

“At the center of our development model, we must lay the groundwork for a new kind of knowledge, what some have called a ‘science of delivery,’ which countries will use to meet the demands of their people,” Kim said. “It does not yet exist. We must create it together.”

Taking Korea’s Saemaeul Movement, a political initiative launched in 1970 by late president Park Chung Hee to modernize the rural economy, as an example, Kim said Korea could serve as a shining example of how to foster economic growth for developing countries. Kim said the movement’s idea of focusing on developing the agricultural sector rather than urbanization was “innovative” at the time.

“In the late 1950s, many development experts said Korea was doomed to collapse or was beyond repair because of its Confucian culture,” he said. “However, they have since changed their minds, saying that the country’s economic growth was supported by this culture.”

Kim said he would like to meet with Korean leaders including President Lee Myung-bak to discuss ways in which Seoul and the World Bank can cooperate. He also hinted at the possibility of providing aid to North Korea.

“The World Bank is capable of establishing infrastructure like roads, power facilities, education systems,” Kim said. “If the North requests it, the World Bank will actively help.”

Kim, whose father was born in North Korea, said he feels saddened by all the news of natural disasters, food shortages and other hardships endured by those living in the reclusive state.

Born in 1959, Kim moved to the U.S. with his family when he was 5 years old. He served as the president of Dartmouth College from 2009 to this year and is also known for his tireless efforts to combat the spread of HIV/AIDS and tuberculosis in the developing world. He was formerly the chair of the department of global health and social medicine at Harvard Medical School, and is a co-founder and executive director of Partners in Health.

Kim was nominated by U.S. President Barack Obama in March to head the 187-nation World Bank.