‘First time we fled our homes since the Korean War’

‘First time we fled our homes since the Korean War’ 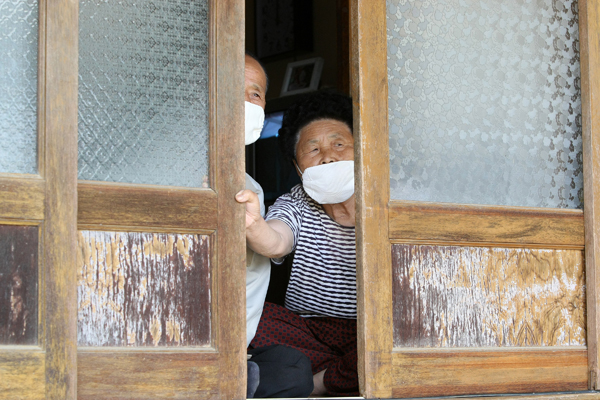 
“I still feel pain in my throat even 10 days after the leak,” said Kim, who declined to give his full name, as he lay on a hospital bed Sunday in Gumi, North Gyeongsang.

Kim is one of seven people who were hospitalized for having inhaled poisonous hydrofluoric acid gas leaked from a chemical plant at the Gumi National Industrial Complex.

“I was working at my greenhouse for melons when I heard the announcement on the public speakers that there was a fire in town. About five minutes later, I smelled a strong odor and my nose started burning.”

Kim and his wife both were exposed to the leaked gas as their greenhouse was only 250 meters (273 yards) away from the industrial complex. They each suffered severe headaches and nausea, and were admitted to a hospital and diagnosed with second-degree damage from exposure to a chemical substance.

Kim said the atmosphere in the town after the Sept. 27 leak reminded him of the chemical, biological and radiological warfare training he received at boot camp.

“Hydrofluoric acid can remain in the bones for up to 20 years. The gas does not decompose easily. It can also remain in soil and plants and have negative effects over the long term,” said Park Jeong-im, a professor of environmental conservation at Soonchunhyang University, during a conference held by the Citizens’ Institute for Environmental Studies in Seoul on Friday.

As of yesterday, 4,195 people in Gumi received medical treatment for exposure to the poisonous gas with many having respiratory problems and severe irritation to their eyes and skin.

Gwon So-sun is one of 273 residents who abandoned their homes from the area near the leak site and sought shelter at an evacuation center over the weekend.

“This is the first time we have fled our home since the Korean War,” the 87-year-old resident told the JoongAng Ilbo. “During the war, only distant sounds of cannons were heard, but now the whole area is visibly affected by the gas.”

“A total of 273 residents from the two towns near the chemical plant have moved to temporary shelters out of the 1,179 villagers. The remaining people are still in the town,” said an official at the emergency center run by the municipal government. 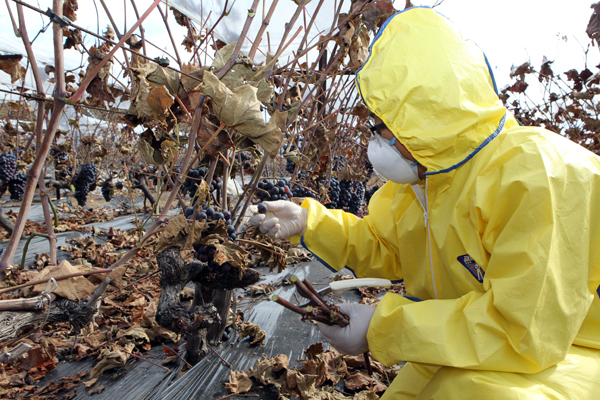 On Monday, civic officials assess the extent of damage done to fruit caused by a massive hydrofluoric acid gas leak in Gumi. [YONHAP]


The 273 residents from the affected area voluntarily decided to move to the safe zone as of yesterday since there has been no government action on the matter.

“Finding out where and how the contamination spread to areas and affected people in the first three days of the accident is much more important than the current toxicity level in the air,” said Bae Moon-young, director at the Nakdong River Community.

Bae added that firefighters first using water to contain the gas in the hours after the leak “raises the possibility of wider spread of the toxic acid.”

Regarding 3,209 livestock animals, which are reported to have shown symptoms of exposure to the gas as of yesterday, authorities do not yet have compensation plans for farmers other than having banned them from selling the livestock, according to the Gumi City Government.