Park intervenes to halt meltdown in her campaign

Park intervenes to halt meltdown in her campaign 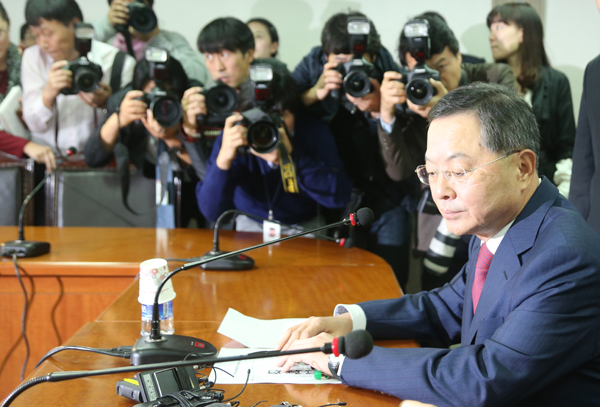 Ahn Dae-hee, head of political reform for the Park campaign, presides over a meeting yesterday at party headquarters in Yeouido, western Seoul. [YONHAP]


Park Geun-hye, presidential candidate of the Saenuri Party, managed to stop a complete meltdown of her campaign yesterday after persuading two key strategists to stay on. 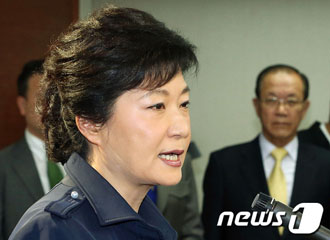 “I have met with Park and told her my position,” Kim told the JoongAng Ilbo Tuesday night. “I will return to my job in two to three days.”

According to the sources, Park telephoned Kim and asked to meet.

During their talks, Kim made clear that he wanted Lee to fully support his economic democratization pledge. He also asked Park to use the Saenuri Party’s majority in the legislature to realize the pledge.

Regarding Lee’s fate as floor leader, Kim said, “I asked Park to make a decision.”

A party source said Park promised Kim that Lee would lay off her presidential campaign and focus on party affairs inside the National Assembly.

Park also contacted Ahn Dae-hee, a former prosecutor who was the head of the campaign committee on political reform, Tuesday night and persuaded him to stay on the campaign.

Ahn threatened to quit the campaign over her recruitment of Han Gwang-ok, a political heavyweight in the Jeolla region and a loyalist of former President Kim Dae-jung. Park recruited Han to head her “Grand National Unity” drive to bring together the conservative and liberal camps. Ahn doesn’t approve of Kim because he once indicted him for corruption, and Kim was convicted, although he sought a retrial.

Ahn yesterday showed up to chair a special committee meeting. “I have never rejected performing my duty,” Ahn said on his way to the party headquarters yesterday morning.

“I didn’t make a demand, but made a recommendation,” he said. “The candidate makes all the decisions.”

According to sources, Park asked Ahn to accept Han’s working for the campaign. They said Park plans to chair the Grand National Unity committee personally and directly supervise Han. Then Han would be tasked to head a project to end regionalism in Korean politics under Park, they said.

Park reportedly explained the inevitability of her decision to Han and asked for his understanding.

Park also tried to engage her former rivals in the Saenuri Party. She met with Gyeonggi Gov. Kim Moon-soo, who lost to her in the party’s presidential primary, to seek his cooperation.

Through her longtime ally Kim Moo-sung, she also tries to mend a rupture with other senior politicians, including Lee Jae-oh and Chung Mong-joon.

Park will announce the final form of her election campaign committee today. “I will make public my position [about the discords] all together tomorrow,” Park said yesterday.

Despite the raging internecine strife in her campaign, Park’s rating rose recently. According to a JTBC-Realmeter poll on Tuesday, Park won 37.3 percent in a race with three main candidates, up by 0.7 percentage points from the last poll. Ahn Cheol-soo, an independent liberal darling, was backed by 31.4 percent, while Moon Jae-in of the opposition Democratic United Party was backed by 19.3 percent. Analysts said the internal strife prompted a sense of crisis among the conservatives and solidified Park’s rating among her core supporters.