Piggybacking on buzz over F1 race a hot new trend

Piggybacking on buzz over F1 race a hot new trend

LG Electronics’ logo displayed during the F1 Grand Prix held in Yeongam, South Jeolla, last year. The electronics company has been one of the most aggressive among Korean companies as it signed a global partnership deal with Formula One Group. Companies are using the sport as a tool to market its brand at home and abroad. [JoongAng Ilbo]


Local companies are ramping up their special promotions and marketing events for this weekend’s Formula One Grand Prix at Korea International Circuit in Yeongam, South Jeolla.

Among Korean firms, LG Electronics has been the most aggressive. It signed a global partnership deal with Formula One Group, led by Bernie Ecclestone, in 2009, making it the only local company to advertise at all of the season’s 20 Grands Prix this year.

LG acquired exclusive designations and marketing rights as the sport’s official consumer electronics and mobile phone maker. The deal runs until next year.

LG has not disclosed how much it is paying for the global sponsorship deal, but sources say it could be more than 30 billion won a year. However, the company has been said the advertising effect exceeds the cost.

“For the last three years, we think our sponsorship has generated millions of dollars through this form of advertising,” said an employee at LG.

F1 is a hot option for advertisers and sponsors. Over 200 companies display their logos on drivers’ suits or helmets, the racing machines themselves or signs plastered around the circuit, as some 600 million people from 190 countries tune in to watch the races.

Allianz Life Korea and DHL Korea, the local branch of the German-headquartered logistics company, have been handing out free tickets to the race through promotional events.

Auto makers are also jumping on the bandwagon. 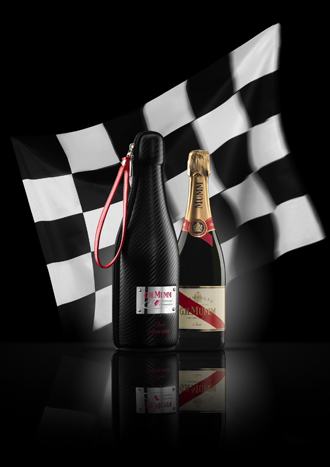 Mercedes-Benz Korea held an event called “Night of the Stars” at Seoul’s Shilla Hotel on Wednesday, inviting 500 selected guests to meet the Mercedes AMG Petronas F1 team. At the event, Thomas Urbach, the CEO of Mercedes-Benz Korea, and driver Nico Rosberg introduced the new SL 63 AMG, a high-performance roadster, to the public.

“The AMG is a high-performance car and we have a high-performance F1 team and, you know, there are exchanges between the two in terms of both personnel and technology,” said Norbert Haug, the vice president of Mercedes-Benz Motorsport on Wednesday. “So it’s quite logical to link AMG with F1.”

The auto maker is also taking the opportunity to promote the safety of its models. Its SLS AMG GT will be used as a safety car for Sunday’s race.

Volkswagen Korea said yesterday it will provide 10 of its Phaeton sedans for F1 officials, while its Touareg SUV will be used as a medical car.

Kumho Tires supplied its tires for use on an F1 racing car that was used by Korean GP organizers to promote the event nationwide. Pirelli is the official tire supplier for the race until 2013 but Kumho, the No. 2 player in Korea, hopes to replace it in the future, according to an employee at Kumho. It began developing F1 tires in 2007 and currently ranks as the official supplier of the 2012 Auto GP World Series.

“We are trying to promote motor sports in Korea,” said Joo Kyung-tae, one of its marketing executives.

CU, the nation’s largest convenience store, announced earlier this week that it has become an official partner of the Red Bull team for the next two years. Its logo is now engraved on the uniforms of drivers Sebastian Vettel and Mark Webber.

“Red Bull has given the domestic energy drink market a massive boost since it was introduced here by CU last August,” said an official at BGF Retail, which owns CU, adding that the store chain sees the Korean GP as a springboard to introducing its brand to people overseas.

“CU does not yet have any specific plan to expand overseas, but it is promoting the brand at international events so people they will become more familiar with it when they visit Korea,” said Yoo Chul-hyun, a public relations official at BGF Retail.

The company said the case is made of a material inspired by racing tires, adding that the reinforced plastic helps keep the champagne inside cold. The event will run until Oct. 31.

Despite the increased marketing, however, many firms are loathe to splash out on a sport that has failed to ignite much public interest since it debuted in Korea in 2010.

“F1 isn’t really considered a sport here yet, and many Korean companies are still finding it difficult to relate to,” said Kim Chong, a sports industry professor at Hanyang University. “The advertising cost is also huge, which presents itself as another obstacle.”