TVXQ and Seohyun have it covered

TVXQ and Seohyun have it covered 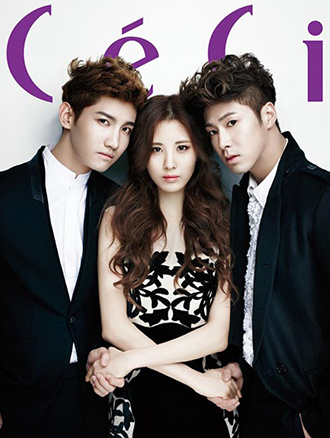 TVXQ and Seohyun were picked as cover models for the Chinese, Korean and Thai editions of the monthly women’s magazine Ceci.

The theme of the pictorial in which they took part for the November issue is called “Timeless Eternity,” inspired by the 1990s movie “Interview with the Vampire.” The two boys of TVXQ posed as seductive vampires, while Seohyun assumed a pure, fresh-faced look.

The 26-page spread was devoted to showcasing the talents of SM Entertainment.

The magazine will go on sale starting Monday in Korea and later in China and Thailand.

Despite their success, the road to the top has been a long and arduous journey for the two boys.

In an interview with Ilgan Sports last week, the two remaining members of TVXQ said that when they were starting out in Japan, each of the five band members had two outfits that they shared. The duo released a new album called “Catch Me” last month, and from next month, will embark on its first world tour.