A Residential Energy Storage Unit (RESU) built by LG Chem is displayed at the Smart Grid Week Exhibition on Jeju in 2010. Provided by the company

ESS refers to a core part in the smart-grid business - it helps to maximize energy efficiency by storing surpluses and supplying it when extra power is needed. It can be likened to a large battery.

Chemical firms here began to make efforts to diversify their business further into energy storage in 2009, based on their capabilities producing lithium-ion or rechargeable batteries. 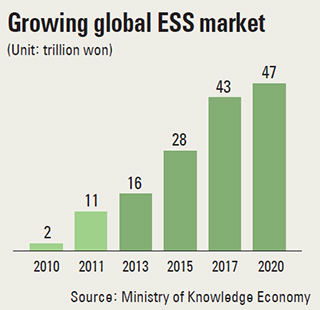 “Interest in the ESS business has been increasing recently as unstable electricity supply is an issue here,” an industry insider said. “Chemical companies that have lithium-ion battery technology are likely to see it as an opportunity to take another leap.”

Because the market is in its infancy, there is no institution compiling exact data about the market.

The Ministry of Knowledge Economy forecasts that the market will grow from 2 trillion won ($1.79 billion) in 2010 to 47 trillion won by 2020, a 24-fold increase. By 2030, the ministry predicts the global ESS market will be worth 120 trillion won, based on piecemeal data by foreign research agencies like Pike Research, Fuji Keizai, Gartner and SDI Marketing.

“Although it is too early to talk about sales of the ESS business, companies are betting on the growth potential of the market,” said Lee Hak-moo, an analyst at Mirae Asset Securities.

The Knowledge Economy Ministry plans to mandate that power companies begin installing ESS in 2022 in order to combat the unstable power supply due to the increasing use of renewable energy.

The government also aims to occupy 30 percent of the global ESS market with plans to invest 6.4 trillion won in it by 2020. By that time, Korea would have 1,640 megawatts of energy in storage, according to the plan.

Hyosung Group is a newcomer in the local ESS market that is being shaped by bigger players like LG Chem and Samsung SDI.

Choosing the ESS as a new growth engine for the group, Hyosung is set to provide ESS of 250 kilowatts and also 500 kilowatt-hours to Guri Agricultural & Marine Products Corporation until the year-end to help the corporation stabilize the power supply.

Hyosung’s ESS would help supplement supplying power to around 1,000 affiliates of the agricultural corporation, the company said.

“When the ESS is widely introduced, we don’t need to worry about blackouts in the scorching summer and freezing winter,” said a Hyosung employee. “Hyosung plans to make consistent efforts into the smart grid field with the aim to contribute to boosting the country’s energy efficiency.”

In 2010, the company supplied a 10 kilowatt-hour ESS battery to U.S.-based power company Southern California Edison. It was the first Korean company to sell ESS to an overseas company.

In last November, it signed a long-term contract with Swiss-based ABB, the world’s largest engineering company for power facilities, to supply ESS.

“We started developing lithium-ion batteries for cars as the first Korean player, and now we are expanding into a larger ESS field,” said an LG Chem employee. “Of course, we believe we are pretty fast in this new market, too.”

SK Innovation is also gearing up to expand its EV battery business into ESS. Based on its lithium-ion battery separator, the third of its kind in the world, the company intends to foster the business.

At the 200 megawatt-hours EV battery plant in Seosan, South Chungcheong, which started operation in September, the SK unit aims to develop technology to produce ESS.

“When renewable energy is widely used, ESS will ensure a predictable and stable supply of electricity,” said an SK employee.

Samsung SDI, an archrival of LG Chem in the lithium-ion battery market, inked an exclusive deal with Nichicon, a Japan-based power equipment builder, to supply ESS for households in October last year.

LG Electronics signs deal with Qualcomm on 5G for cars