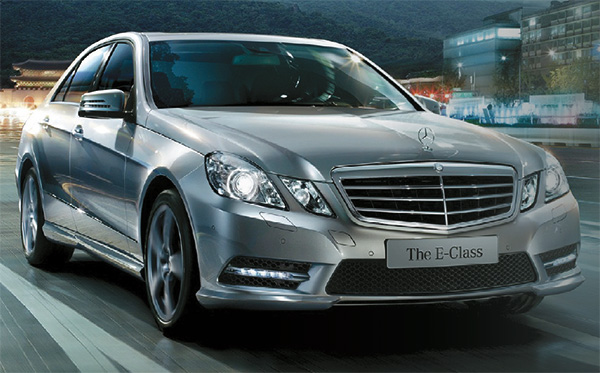 Mercedes-Benz’s new E 300 sedan hit the local market on Oct. 5. All of the E 300s are equipped with direct-injection V6 gasoline engines that can generate 252 horsepower and 34.7 kilogram-meter torque. They retail for between 69.1 million (62,180 dollar) and 80.1 million won. Provided by the company


Mercedes-Benz is ready to boost its sales in Korea as its new E-Class models, which officially hit the local market on Oct. 5, are already catching consumers’ interest with upgraded features.

The German automaker is currently ranked No. 2 in the imported car market behind BMW after rolling out 15,318 vehicles in the first nine months of this year, a 5.2 percent on-year increase. 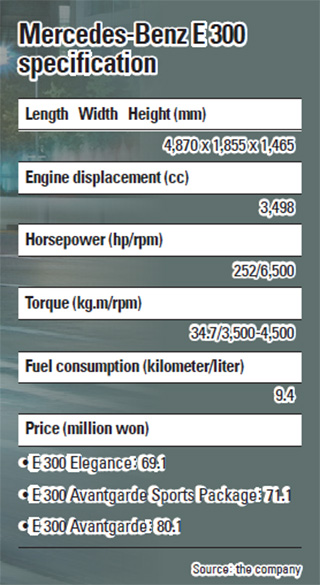 However, its sales growth has failed to match that of other top foreign brands. While BMW has already sold 15.1 percent more cars than it did last year, Volkswagen rose 27.5 percent and Audi jumped 43.5 percent, according to data by the Korea Automobile Importers and Distributors Association.

But with the release of the 2013 edition of its E-Class models, the company is confident it can shift sales up a gear.

Eleven different models of the E-Class, which started out as the 170 V Series in 1947, will be sold in Korea, including the newly added E 300 Avantgarde Sports and the E 350 coupe and cabriolet.

“The 2013 E-Class is equipped with a localized infotainment system and GPS navigation,” Benz said in a statement. “The display color of all of the models’ instrument clusters has changed from beige to silver, giving it a more luxurious and stylish look.”

Sales slowed this year but began picking up again in recent months. It currently ranks third among imported cars behind BMW’s 520d and Toyota’s Camry, after it sold 4,121 units from January to September. However, it topped monthly sales in July, came second in August and topped the table again last month.

The E 300s are equipped with direct-injection V6 gasoline engines that can generate 252 horsepower and 34.7 kilogram-meter torque. At the same time, it lowered CO2 emissions by 25 percent from previous models.

The E 300 Elegance also comes with 17-inch 5-twin-spoke light-alloy wheels and an ash wood trim. The newly introduced E 300 Avantgarde Sports Package applies an Exterior AMG styling package in its design to give a more dynamic and sporty look.

To challenge BMW‘s 520d, Mercedes-Benz is expected to ramp up marketing of its E220 CDI.

Despite adding more convenient features inside the vehicle, the price tag has also dropped from 64.2 million won to 61.9 million won in line with the government’s temporary reduction of consumption taxes on automobiles. The new retail price makes it just 100,000 won cheaper than the BMW.

Mercedes-Benz has been promoting the enhanced fuel consumption of its diesel models, as well as its BlueEfficiency technology, which enabled the E220 CDI to meet the EU 5 standard in terms of CO2 emissions. It emits 157 grams of CO2 per kilometer (8.91 ounces per mile), according to the company.