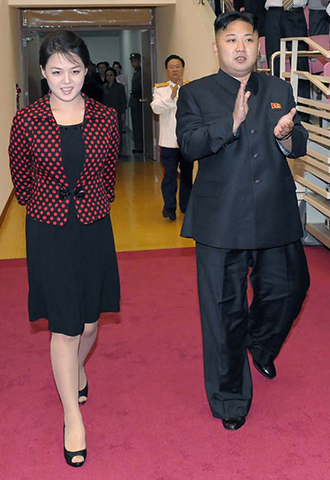 North Korea’s first lady, Ri Sol-ju, has dropped out of public view just 10 weeks after being introduced to the world as the fetching bride of new leader Kim Jong-un.

The reason may be an excessive fashion sense leading to political and filial neglect. Apparently, Ri was making public appearances without the badge honoring North Korea’s founder Kim Il Sung and his son Kim Jong-il, the late grandfather and the late father of her husband.

Ri, 23, hasn’t been shown in the official state media for the last 39 days.

Her last public outing reported by the state media was on Sept. 3 when she visited a military band of the North Korean Army along with her husband.

When Kim Jong-un paid his respects at his father’s coffin in the Kumsusan Memorial Palace in Pyongyang on Wednesday with an array of high-ranking military and party officials, she didn’t appear. The occasion was the 67th anniversary of the ruling Workers’ Party.

A source familiar with North Korean affairs told the JoongAng Ilbo that the young first lady seemed to have angered some high-ranking officials by her free fashion sense.

“We were informed that Ri’s vanishing act is because she didn’t wear the badge that bears portraits of the two late leaders, Kim Jong-il and Kim Il Sung,” the source said.

All senior party and military officials wear the badge, the source said.

“All adults should pin the badge on their clothes at all of state and public events,” said a North Korean defector who had a high-ranking position in the regime. “If Ri violates this rule, even a first lady will not be easily forgiven.”

The JoongAng Ilbo checked all photos and video clips of Ri released by North Korean state media and found that she hadn’t worn the badge starting from July 25, the day she was revealed as the wife of Kim Jong-un.

“Sometimes Ri wore a brooch instead of the badge,” the source said. “It’s because of her own fashion style or her personality.”

Ri first came into the spotlight on July 6, when she watched a performance featuring Disney characters with Kim Jong-un. At the time, she wore the badge.

On July 14, the first couple of the North also paid a visit to a kindergarten together, and both of them also wore the badges.

Since her debut on July 6, Ri has appeared at 18 events with her husband, holding a luxury handbag or linking her arms through his.

“There were some concerns about her liberal style among North Korean officials,” a South Korean government official said. “So the matter of the badge could become a problem.”