Young gun gets the nod vs Iran in WC qualifier

Young gun gets the nod vs Iran in WC qualifier 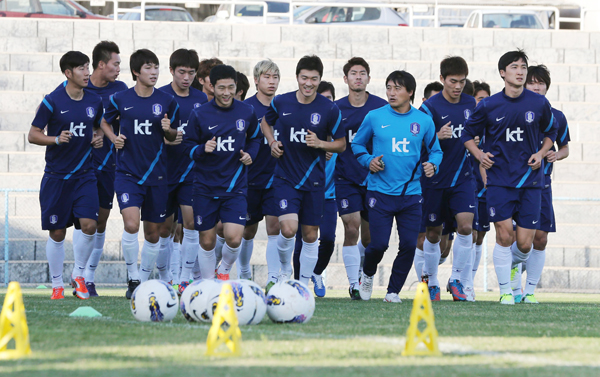 Son Heung-min, far left, and the other members of the Korean national football team practice on Sunday in Tehran ahead of Korea’s fourth match of its final World Cup qualifying round. [YONHAP]


Son Heung-min has had quite a month. The 20-year-old striker of Hamburg SV scored the game winner in the Bundesliga around one week ago, and now he is being called on to provide a spark up front for the national team during Korea’s crucial 2014 FIFA World Cup qualifier.

The Taegeuk Warriors will play Iran in Tehran at 1:30 a.m. early tomorrow morning, Korea Standard Time, in their fourth match of the final qualifying round for the World Cup. Korea is in first place in Group A with seven points, while Iran is in second place with four points. The top two seeds will advance to the tournament in Brazil.

National team coach Choi Kang-hee is rolling the dice on the 20-year-old, selecting him alongside veterans Park Chu-young of Celta Vigo and Ki Sung-yueng of Swansea City,

While Korea sits in first place, the results of the two matches against Iran, their biggest challenge in the five-country group, could drag them down from the top. Qatar and Lebanon are also right behind Korea with four points, behind Iran on goal differential.

Iran has been effective in pressing Korea during recent matches with their sturdy defense and quick passing, something that Korea could not easily overcome with its conventional tactics.

Coach Choi has said that Son can make the difference, helping put the pressure on Iran’s back line and easing the challenge for Korea’s defense, which looked vulnerable during a draw against Uzbekistan in the last qualifier.

A graduate of the Hamburg youth academy, Son has long been seen as a talent for the national team. Some dismissively refer to him “Pre-naldo,” meaning a Ronaldo-like player in the preseason alone. He scored nine goals and 18 goals in the 2010-11 season and 2011-12 season, respectively, but his net-finding sense fizzled out toward the latter part of the Bundesliga season.

That lack of steadiness in addition to his tendency to flaunt individual skills rather than build team chemistry has limited his role on the national team. Since making his A-match debut in December 2010, when Korea took on Syria, Son has not been given much of a chance to shine. He has played 10 A-matches, but mostly coming on as a substitute.

This year with Hamburg he has come on the pitch with a different look - a steady, clutch sharpshooter. Son has scored four goals in the first seven matches of the 2012 Bundesliga season, the second most goals in the league.

German media picked him as one of the league’s best 11 for two straight weeks and ESPN reported that Liverpool is seeking to buy him for 10.5 million pounds ($16.8 million).

His growth has been so impressive that coach Choi called him up for his team, while leaving his beloved pupil Lee Dong-gook from the Jeonbuk Motors off the roster for the first time since he took the helm of the national team in February.

Choi revealed that he will use Son as a shadow striker for Park during the Iran match.

Son said he is confident in his ability to contribute to the game.

“If I am given a chance, I am confident I will make a good play in any position,” Son said.

“It is time to break the Iran away jinx,” Choi said, referring to Korea’s winless record on the road versus Iran.

After the Iran match, Korea will take a five-month break before taking on the remaining four matches.