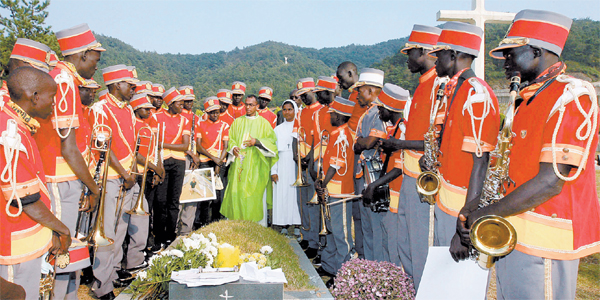 Members of the Tonj Brass Band pay their respects Sunday at the grave of the late Father Lee Tae-seok in Damyang, South Jeolla. Father Lee formed the band during his eight-year-mission in what is now South Sudan. By Oh Jong-chan


The conductor could not keep from looking at a photo of the late Father Lee Tae-seok as the musicians from South Sudan played hymns.

When the music stopped, all 29 members of the Tonj Brass Band knelt near Lee’s grave in Damyang County, South Jeolla and wept. 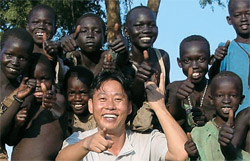 The emotional graveside performance on Sunday came three years after Lee left for his homeland, promising them he would return to Tonj.

“I remember Father Lee teaching me how to play a trumpet when I was 7 years old,” said Santo, who is now 15. “I wish the father is in heaven watching us.”

The Tonj Brass Band was started by Lee after he discovered that music could lift the spirits of young people during his eight years as a medical missionary in the impoverished town in South Sudan.

The band became well known in Korea thanks to the film “Don’t Cry, Tonj,” which traces the trajectory of Lee’s life. It visited Korea at the invitation of the Korea-Africa Economic Cooperation Conference, and the band performed at a banquet yesterday in front of ministers from African nations and Korea at the Shilla Hotel, central Seoul.

Today, Father Lee is revered in the Tonj area and Korea as the Korean Albert Schweitzer. Before his ordination as a Catholic priest, Lee was a medical school graduate. He gave up a chance for a lucrative career as a physician in Korea to live in a faraway land.

But Lee was diagnosed with colon cancer in 2001, soon after he arrived in what was then the southern part of Sudan. He was among a handful of Korean priests to volunteer for a mission to the war-torn country, and he put all his effort into building up the community he served.

For many years, Father Lee was the only person in the area with any medical knowledge, and he built 12 temporary hospitals and a school. Lee treated people suffering because of the strife and cared for children orphaned by the war.

“Would Jesus have built a school or a church first?” Lee asks in “Don’t Cry, Tonj.” “He would have built the school first.”

The young musicians at Father Lee’s grave stood by members of his family. “I can vividly remember Tae-seok saying he had to go back to Tonj while he was fighting the cancer,” said Lee Young-nam, the priest’s sister. “Watching them play for Lee here at his grave makes my heart sink.”

In remembrance of Lee’s self-sacrifice and unconditional efforts to improve people’s lives in Tonj, the Export-Import Bank of Korea and the South Sudanese government launched the Smile Tonj Project in January.

Under the project, the new African country’s first modern general hospital and medical school were named after Lee Tae-seok.

The John Lee Hospital will be constructed in Juba, South Sudan, and represents a significant step toward carrying out Father Lee’s lifelong wish to improve the livelihoods of people in South Sudan.

John Lee is the baptismal name of Father Lee Tae-seok.