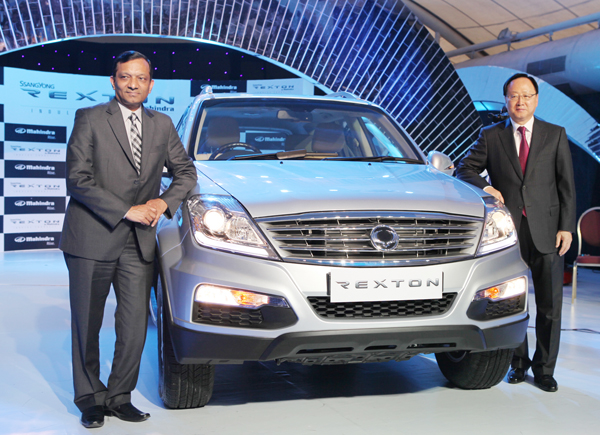 Pawan Goenka, president of the automotive and farm equipment division of Mahindra & Mahindra, left, and Lee Yoo-il, CEO of Ssangyong Motor, pose beside a Rexton W sport utility vehicle during a ceremony to mark the model’s launch at the Lalit Intercontinental Hotel in Mumbai on Wednesday. Provided by the company


Ssangyong Motor hopes to make a strong first impression on Indian consumers with its Rexton W, as its premium SUV entered the world’s seventh-largest auto market on Wednesday through its parent company Mahindra & Mahindra (M&M).

The third-generation Rexton, which now comes with the letter W appended to its name, is being sold in almost 70 countries. But this marks the first time that Korea’s smallest automaker has released it in India, the home of Mahindra Group, where the vehicle will be assembled as a completely knocked down unit.

M&M, one of the group’s subsidiaries, bought a controlling stake in the Korean automaker in March 2011 for $460 million.

“This is the best possible market for Ssangyong,” M&M’s CEO Lee Yoo-il said in Mumbai during the launching ceremony on Wednesday. “I am very confident that India will become Ssangyong’s second-largest export market.”

This would still leave it behind Russia, which snaps up 30,000 to 40,000 vehicles a year, but see it dislodge South America, which as a region currently fills the No. 2 spot.

The company has been aggressively tapping overseas market. Last year, it sold a total of 113,000 vehicles, including 74,350 overseas. This is the company’s best sales record to date and one that is expected to grow in line with rising exports.

Ssangyong said last summer it is targeting global annual sales of 160,000 vehicles through 2013 and 300,000 vehicles after that until 2016. To achieve this goal, it plans to fully exploit its tie-up with Mahindra, and the launch of the Rexton is being presented as their first major collaboration.

“The product will be badged as a Ssangyong Rexton made by Mahindra in India,” Pawan Goenka, president of M&M’s automotive and farm equipment division, was quoted as saying by Indian daily The Hindu. “While Mahindra brings the assurance of the brand, Ssangyong brings performance, style and power,” added Goenka, who also serves as chairman of Ssangyong Motor.

Goenka said the company will decide whether to bring over more vehicles from Korea, such as the Korando C, after gauging the success of the Rexton.

This will be assembled at Mahindra’s Chakan plant in Pune, western India, with parts coming from both countries. The company has invested 630 million rupees ($11.9 million) to locally assemble the all-wheel-drive vehicle in order to escape import tariffs.

“We will start with a 5,000-unit annual capacity,” said Pravin Shah, the chief executive at M&M’s automotive division. “We will consider localizing further depending on the response.”

Mahindra is confident that Rexton will be a big hit in India as the product arrives at a time when SUV sales are surging.

Total car sales in India fell 0.3 percent on-year to 909,972 units for the first six months of the current fiscal year from April to September, according to data from the Society of Indian Automobile Manufacturers (SIAM).

However, sales of utility vehicles alone rose 56 percent on-year to mark 255,895 units because of a growing preference for diesel-powered vehicles and an increasing trend of off-road travel, according to SIAM.

Mahindra, India’s biggest SUV maker by sales, has been smiling with the growing demand in the utility-vehicle segment. It sold 129,154 vehicles from April to September, a 28 percent increase from a year earlier. The company produces five SUVs - the XUV500, Scorpio, Xylo, Bolero and Quanto. It added that the Rexton will not cannibalize the market share of its other products as the Korean model is more expensive and sits in the premium segment. It aims to sell 500 Rextons a month.

The Korean SUV will be sold in two versions, with the manual transmission starting at 1.76 million rupees and the top-end automatic costing 1.97 million rupees, according to the carmaker. The most expensive SUV model from Mahindra is the XUV500, priced at 1.42 million rupees.

However, Rexton will have to compete against other foreign models like Ford’s Endeavour, GM Chevrolet’s Captiva and Toyota’s Fortuner.

In particular, the Japanese model, which costs 2.11 million rupees, swallows up more than half of sales in India’s premium SUV segment, making it the biggest barrier to Rexton’s success. The Fortuner sold 7,824 units from April to September, a 44 percent on-year increase.