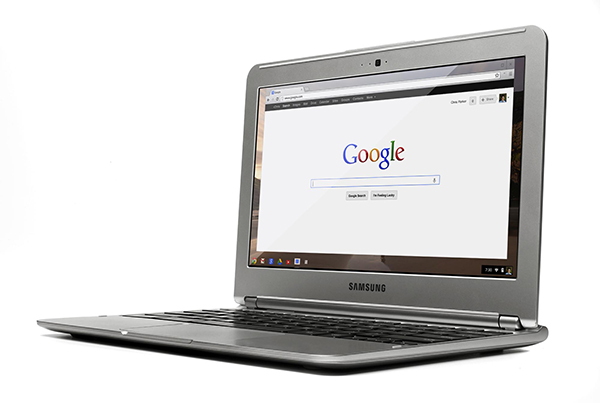 Google said Thursday it has teamed up with Samsung Electronics to introduce a lower-cost version of the Chromebook. The laptop, which costs about 249 dollar in the United States, is powered by a Samsung microprocessor similar to those used in mobile devices. It is available now for early online orders and goes on sale in retail stores today. [AP/YONHAP]

Google’s profit and sales are under pressure as the operator of the world’s largest search engine struggles to wring advertising dollars from the growing number of people who surf the Web on tablets and smartphones.

The company on Friday reported third-quarter revenue, minus some items, of $11.3 billion, short of the average estimate for $11.8 billion, according to data compiled by Bloomberg. Third-quarter profit excluding some items was $9.03 a share, below estimated profit of $10.65 a share. The stock tumbled 8 percent after the results were released early.

Google, the biggest seller of search-based advertising, hasn’t yet translated to mobile devices the success it has had with desktop advertising. Ads generated on smartphones can cost about 40 percent less than those on traditional computers and about 25 percent less than on tablets, said Herman Leung, an analyst at Susquehanna International Group.

“The big pressure is actually coming from mobile,” Leung said. “It’s a concern for investors because they just make less on mobile right now.”

Shares of Google fell 1.9 percent to $681.79 at the close in New York. The stock has gained 5.6 percent this year. Google on Friday dropped as much as 11 percent to $676 before the company asked Nasdaq OMX Group to temporarily halt trading.

The average amount advertisers paid each time a user clicks on a promotion declined about 15 percent from a year earlier, and was 3 percent less than the prior period.

Google also struggled with its so-called sites revenue, which includes its search-related ad business, the company’s core revenue generator. It grew 15 percent to $7.73 billion from the same period a year earlier, less than half the growth Google reported in the third quarter of 2011.

That suggests consumers may be bypassing Google to seek out information on Web sites such as Amazon or Yelp, said Sameet Sinha, an analyst at B. Riley & Co.

“This is the main product, the most profitable product that they have,” Sinha said. “It’s just shocking.”

Google got off to a difficult start with the early release of the results. A statement in a regulatory filing - which was issued hours before the company had planned to report earnings - had a line at top that says: “Pending Larry quote.” Google blamed R.R. Donnelley & Sons Company, a company that handles financial printing, for the premature release.

Page later joined a conference call with analysts, after skipping the company’s earnings call in July because of issues with his voice. He began by saying his voice was “hoarse,” and that his remarks would be “reasonably short.” Yet he stayed on the call and answered many questions from analysts, speaking relatively softly.

He said he was sorry for what he called the “scramble” of the early earnings release.

Amid questions about the performance of mobile ads, Page said the company is well-positioned to make money from the growing number of devices that people use to access the Web, including smartphones and tablets.

“As we transition from one screen to multi-screens, Google has enormous opportunities to innovate and drive ever-higher monetization,” Page said on the call.

Google’s revenue tied to mobile businesses now is on pace to reach $8 billion on an annual basis, Chief Financial Officer Patrick Pichette said on the call.

Unlike last year, when the company said its annualized mobile revenue would be about $2.5 billion, the new number includes sales of applications and content on its Google Play store. Still, the vast majority comes from advertising, Pichette said.