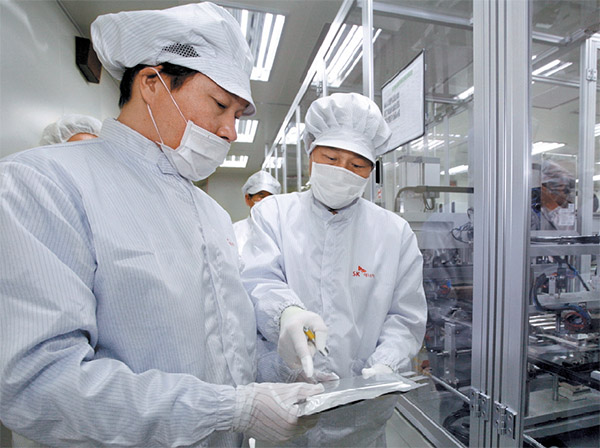 
SK Innovation, Korea’s largest oil refiner, is set to diversify its business portfolio by entering the car battery and chemicals markets to rebrand itself as a broader energy company over the next 50 years.

As the company celebrated its 50th anniversary on Oct. 13, it is set to change gears to find new growth engines through technology and research and development.

“Securing top-notch technology that no one else has can guarantee future growth,” SK Group Chairman Chey Tae-won often says to CEOs of the group’s affiliates, according to the group’s employees.

“This technology will help us record 290 trillion won [$263 billion] in sales and an operating profit of 14 trillion won by 2020,” he said during the celebratory event for the company’s 50th anniversary.

To refine technological skills through intensive R&D, the company has invested largely in two business projects, including batteries for electric vehicles and materials that transmit electronic information. Some of the latter technology is also applied in car battery manufacturing as well.

The company did not disclose how much it plans on spending on R&D.

Chey said that technology and R&D that do not result in products are of no use.

“As technology and R&D are our hope for the future, we need to make sure we commercialize skills to produce some globally recognizable products,” the chairman said.

The company, which previously supplied lithium-ion batteries for vehicles made by Mitsubishi Fuso of Daimler Group and some by Mercedes-Benz, completed construction of a new electric vehicle battery plant last month in Seosan, South Chungcheong.

To herald its full-fledged entry to the related market, the company invested 250 million won in its second electric vehicle battery plant, which has a capacity to power 10,000 electric vehicles a year.

“We plan on becoming the No. 1 electric vehicle battery maker in the world by 2020 to contribute to the country’s green growth,” said Chey Jae-won, executive vice chairman of SK Group, at the opening ceremony of the plant.

Earlier in the year, Chey said that the battery sector is forecast to be “a profitable enough business that may even substitute the company’s oil refining business.”

It not only signed a comprehensive memorandum of understanding with Kia Motors in July so that SK would provide batteries for the next generation of Kia’s compact-sized electric vehicle RayEV, but also agreed in the same month to set up a joint venture with German automotive parts supplier Continental.

“The cooperation of the two companies is a remarkable starting point to open a new horizon for future transport,” said Chey in July when the company announced its new venture plan.

“The combination of SK’s battery know-how and Continental’s battery system will yield the best solutions for the operation of electric vehicle batteries.”