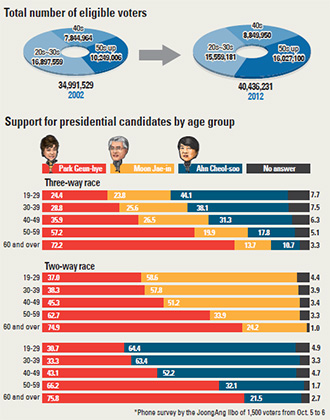 Korea’s aging society is becoming a big factor in elections.

The number of young voters, who often vote liberal, has gone down, and the number of older voters, who value stability and conservative politicians, are now a larger segment of the voting pool than before.

The candidates are tailoring their strategies to take advantage of - or mitigate - the demographic changes.

The total number of eligible voters for December’s election is 40.4 million. Voters in their 20s and 30s comprise 38.5 percent of eligible voters this year, down from 48.3 percent in 2002. Voters in their 50s and older comprised 29.3 percent in 2002, but they have grown to 39.6 percent of the total, according to the National Election Commission’s 2002 records and the Ministry of Public Administration and Security’s statistics as of late September this year.

Poll experts said the change obviously favors conservative candidate Park Geun-hye of the ruling Saenuri Party and will be a problem for the two liberal candidates Moon Jae-in of the Democratic United Party and independent Ahn Cheol-soo.

“The turnout is also often higher for older voters,” said Yoon Hee-woong, senior researcher at the Korea Society Opinion Institute. “And Park has strong support from them. So the change will benefit her.”

At a sports event held on Oct. 14 in Hyochang Stadium in Seoul for people whose hometowns are in North Korea, Saenuri Party candidate Park Geun-hye, left, is welcomed by elderly Koreans who fled from the North before and during the Korean War. A water bottle is thrown at Moon Jae-in, center, the Democratic United Party’s presidential candidate, at the same event. Jeong Ji-uk, a leader of the sports event organizers, tells independent candidate Ahn Cheol-soo, right, that they cannot support Ahn if Ahn is pro-North Korea.[Joint Press Corps]


The JoongAng Ilbo conducted a survey on Oct. 5 and 6 and then recalculated the results using the voter demographics from 10 years ago. After the recalculation, Park’s approval rating fell by 4 percentage points in races against one or more candidates.

On the flip side, both Moon and Ahn enjoyed 4 percentage point boosts in their ratings.

Moon and Ahn are both paying more attention to older, conservative voters. Moon visited the Navy’s 2nd Fleet Command in Pyeongtaek, Gyeonggi, on Oct. 12 and laid flowers before the wreckage of the warship Cheonan, which was sunk by North Korea. It was a trip designed to appeal to the conservative generation, which is sensitive about the security issue.

“Everyone asked him to refrain because the Cheonan is a sensitive issue,” said a Moon aide. “But Moon was determined to tackle the issue straightforwardly.”

(Ultra-liberals in Korea deny that North Korea was behind the sinking.)

Ahn, whose support is strong from voters in their 20s and 30s, stressed his commitment to welfare for the elderly on Oct. 7. He cited the example of a 78-year-old woman who committed suicide after the government cut her off from the minimum standard of living subsidy, saying things would be different if he were president.

Conversely, Park is trying to woo younger voters. She visited Kyungnam University in Changwon, South Gyeongsang, on Monday and chatted with members of the student association.

An incident at a gathering of the elderly on Oct. 14 clearly showed Park’s support among the elderly conservatives, and Moon’s and Ahn’s lack thereof.

A sports event was held on Oct. 14 for people whose hometowns are in North Korea. Many of the attendees were elderly Koreans who crossed the inter-Korean border before or during the Korean War, and they are known to have conservative opinions on national security issues.

All three candidates made appearances at the event, but the receptions they received were drastically different. Park got a warm welcome. Ahn was jeered for his “indecisive” and “lukewarm” policy toward North Korea.

Moon suffered the worst: Some people threw water bottles at the former chief of staff of President Roh Moo-hyun, a supporter of the “Sunshine Policy” of engagement of North Korea.

With such a generational divide, voters in their 40s will swing the election, and as a group, they could go either way.

“Voters in their 40s are very flexible,” said Jeong Han-wool, head of the Center for Public Opinion Research at the East Asia Institute. “They have experienced democratization, their lifestyle is rather conservative but their ideology is liberal. It really matters which direction they decide to go.”

Yoon said voters in their 40s are often considered middle-of-the-roaders, but their importance has risen in this election because they can influence the opinions of voters in their early 50s.

A recent survey conducted by the JoongAng Ilbo, SBS, the East Asia Institute and Hankook Research last week backed the argument that voters in their 40s will be a decisive factor.

Park is only seeing a slight lead in hypothetical two-way races against the two liberal candidates because voters in their 40s largely support the liberal contenders.

That is a contrast to voters in their 20s. Ahn was backed by 45 percent of them and Moon by 36.9 percent.

Voters in their 40s, however, are not unconditionally supportive of Moon or the DUP, Chung said, pointing that they are not a politically homogeneous group.

Gender also plays a role among voters in their 40s, the survey showed. Among the men, Moon was backed by 37.4 percent in a race with multiple candidates, while Park received 28.7 percent and Ahn 25.1 percent.

Female voters, however, supported Park largely. Park scored 30.5 percent among women in their 40s, while Ahn followed with 30.5 percent and Moon with 24.4 percent.

Since there is now a smaller number of younger voters, the liberal candidates’ chances are already lower and will decrease further if turnout decreases among youth.

To minimize that risk, the DUP is pushing for an extension of voting hours on election day so young people can vote after school or work.