Ahn pads out camp with former secretary to Lee

Ahn pads out camp with former secretary to Lee 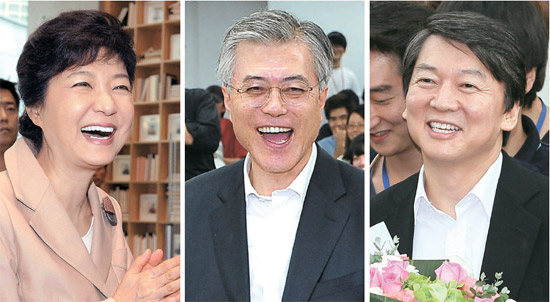 The presidential campaign of independent Ahn Cheol-soo has taken on not only aides to prominent Democratic United Party politicians but also a former secretary in the Lee Myung-bak Blue House.

First launched with a handful of staffers when he announced his presidential bid on Sept. 19, Ahn’s campaign grew to about 160 regular members over a month. The latest addition was Lee Tae-gyu, who served briefly as the speech writer of the Lee Blue House in 2008. According to Yoo Min-young, Ahn’s spokesman, he joined Ahn’s campaign on Friday to work as director of future planning.

Before the defection, Lee was working at the Saenuri Party’s think tank, Youido Institute. He also served on President Lee’s 2007 presidential campaign as a planning chief. After Lee Myung-bak’s primary victory against Park Geun-hye in 2007, his role was largely praised. He then joined the Blue House as a speech writer but quit after only one month.

Although he said at the time that the resignation was voluntary because the job was different than what he expected it would be, speculation was made that he was pushed out in a power struggle.

In the April legislative election, he wanted to run in the Ilsan Seo District of Goyang, Gyeonggi, but failed to win nomination.

“Lee is one of the reformists who worked hard to promote new politics,” Kim Sung-sik, a co-chairman of Ahn’s campaign headquarters, said on Friday.

“It is my understanding that he agreed with Ahn’s vision for new politics and joined the campaign.”

Kim is also a defector from the conservative Saenuri Party. The former lawmaker left the ruling party and joined Ahn’s campaign on Oct. 7.

In addition to President Lee’s former speech writer, other aides to the prominent DUP politicians who were defeated by Moon Jae-in in the party primary also moved to Ahn’s campaign en masse.