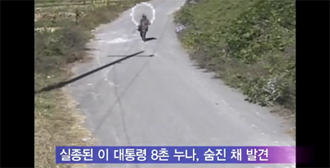 CHEONGSONG, North Gyeongsang - An elderly female relative of President Lee Myung-bak was found dead yesterday floating in a stream in Cheongsong County, North Gyeongsang, eight days after the 87-year-old Lee went missing while hunting mushrooms with family members. Her body was found floating in knee-deep water without her shoes, the police reported.

She was found two kilometers (1.2 miles) away from the scene where Lee was last spotted in a CCTV footage on a street on Oct. 15 and three kilometers away from a hut on the mountain that Lee and her family built to spend their time there.

There were no signs of foul play, according to the authorities.

“We handed over the body to Lee’s family as they did not want an autopsy and there is no evidence to suggest it was crime-related,” said an official at the Cheongsong Police Precinct.

Lee, who suffered from Alzheimer’s disease, was reported to have been living in the makeshift house since last month with her family members and foraging for mushrooms on the nearby mountains.

Lee was reported missing on Oct. 15 after her son and daughter left her in the hut while they went out to buy water. The police carried out an extensive search mission to find Lee until they found her body yesterday.