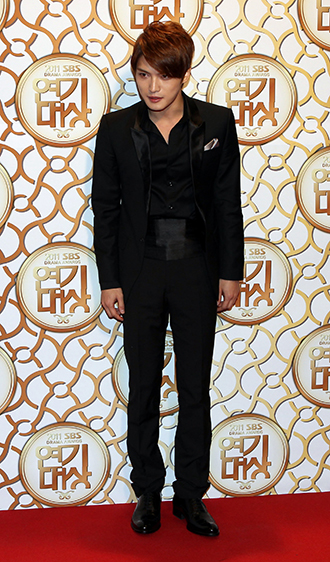 More than 5,000 fans attended the event, and Kim dazzled his followers with an informal forum in which he spoke about acting in his various dramas.

Kim also indulged the fans in playing some games and donned an apron to make some gimbap, or Korean seaweed rice rolls, and fed some of the lucky fans himself.

In addition, Kim set hearts a flutter by handing out a single rose to each participant.

When asked about how he liked Thailand, Kim said that he was comfortable there and could see himself settling there in his old age.

“By then I suppose you will all be married,” Kim said to the fans. “How about then you bring your husbands and kids to my concert?”

When he touched down in Thailand the day before the show, more than 1,500 fans came out to greet Kim, testifying to his Hallyu fame.

At a press conference before the fan meet, more than 100 local media also descended to quiz Kim on his activities.

Next on his Asian fan meet tour are Indonesia and Vietnam.