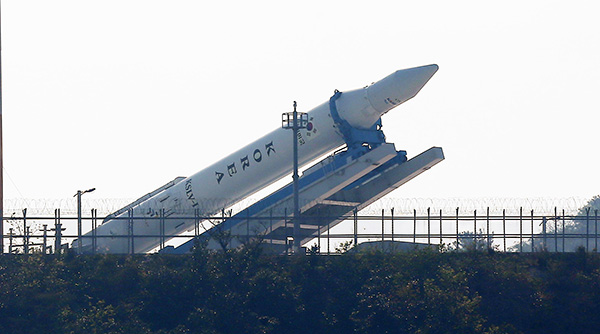 After the launch of the Naro was delayed yesterday due to a leak, the rocket is taken down from the launch platform for repairs. A new launch date has not been set. [YONHAP]


The launch of the Naro rocket, which was supposed to lift a Korean-made satellite into orbit yesterday, was postponed several hours before liftoff.

A helium leak was detected from a connection between the first-stage rocket of the KSLV-1 missile and the launchpad yesterday morning. The Ministry of Education, Science and Technology announced the postponement at 11 a.m. yesterday.

Cho Yul-rae, vice minister of education, science and technology, said the launch will be delayed by at least three days in order to resolve the problem.

There is tremendous pressure on the scientists to succeed with the launch after two failures in the last three years.

Previously, the state-run Korea Aerospace Research Institute said if weather and space conditions were suitable and there were no technical glitches, the launch would happen between 3:30 p.m. and 7 p.m. yesterday from the Naro Space Center in Goheung County, South Jeolla.

Despite conducting a successful seven-hour launch rehearsal on Thursday, Russian engineers found a leak in the seal while injecting helium gas into the first-stage booster during a final inspection at 10 a.m., the ministry said. The cause of the leak was a broken component.

The rocket was removed from its launchpad and brought to the Naro Space Center assembly complex so researchers could replace the broken seal. Then, the rocket will have to be returned to the launchpad, a process that takes at least two days.

Experts said a launch is not likely for another five days. The ministry last month set the launch window between Friday and Tuesday.

Korea began its space development program a decade ago with the aid of Russia and built the KSLV-1 using a Russian-built first-stage rocket. The second stage is Korean made.

The unsuccessful launches in 2009 and 2010 both had similar delays.

If Korea succeeds in putting a 100-kilogram (220-pound) research satellite at least 302 kilometers (188 miles) above earth into orbit, it will be the 10th country to join the “space club.” In Asia, Japan, China and India are already members.

People in Goheung County, the location of the Naro Space Center, were disappointed by the delay yesterday. Thousands of locals and hundreds of tourists gathered near the launch site before noon.

“When I heard the launch was delayed, I couldn’t help worrying that something might go wrong again,” said Choi Seong-chan, a 53-year-old resident of Goheung.

“I hope the broken connection is fixed as soon as possible,” he said, “and that Naro shoots into space successfully this time.”