After the apocalypse that never was

After the apocalypse that never was 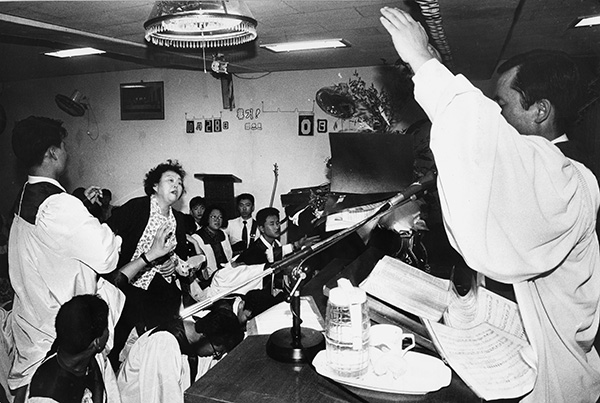 A female follower throws sheets of hymns in protest at the headquarters of the Dami Mission Church in Mapo District, western Seoul, as a rapture that was promised by the heretical church did not occur on the night of Oct. 28, 1992. The church faced strong backlash from believers of the apocalyptic theory and the founder of the now-defunct church was put behind bars for one year for fraud. [JoongAng Ilbo]


On the night of Oct. 28, 1992 - 20 years ago yesterday - around 1,000 fervent people squeezed into the headquarters of the Dami Mission Church in Mapo District, western Seoul, waiting for a rapture that was predicted for midnight. Some had quit jobs or dropped out of school. What was the point of going to work or school when the world was going to end?

“I bow to you, please answer our prayers,” cried the believers.

“On the day of reckoning 20 years ago,” recalls Kim Dong-ho, a JoongAng Ilbo reporter who sneaked into the church for 33 days to cover the story, “people in the chapel were awaiting their moment to fly into the sky with their identification cards, which proved their faith in the end of the world prophecy.”

The passing of midnight without an apocalypse was a big letdown to the believers. According to the data provided by police in 1992, two believers in the apocalypse theory killed themselves and over two dozen people divorced.

Two decades later, the JoongAng Ilbo tracked many of them down to see how they look back on their ill-fated belief. Some have completely rejected the ideas they had 20 years ago, while others still believe in an apocalypse around the corner - perhaps just a few years from now.

But the night passed uneventfully. Shocked devotees went into a panic and questioned their pastors. “Many returned to their normal lives afterward,” says Kim, “But some simply changed the doomsday date a few times to continue their prayers to meet their savior.”

The JoongAng Ilbo tracked down the pastor of the now-defunct Dami Mission Church, who ran the end-of-the-world campaign that attracted a total of 10,000 followers in Korea and overseas. Lee Jang-rim served a one-year prison term for fraud and is contrite about his role in spreading the belief. Lee didn’t respond to interview requests.

“I have come to realize that eschatology is a very dangerous and heretical theory that should never exist in the country again,” writes Pastor Lee in a book titled, “The Explanation of the Book of Revelation of St. John.”

After serving his prison term, Lee changed his name to Lee Dap-gye and founded a church in Mapo District.

When the JoongAng Ilbo visited Lee’s church, which is located on the second floor of a building without a cross, 35 people were worshiping, a big comedown from his thousands of followers in the early 1990s.

“We do believe in the second coming of Christ as Christians, but we do not pick a specific date for the end of the world,” said a follower at Lee’s church, who asked not to be named.

In the 1990s, Lee chose a 17-year-old boy, Ha Bang-ik, as his prophet, and Ha came up with the Oct. 28 doomsday date. Ha followed in the footsteps of Lee by converting to mainstream Christianity and is now a Presbyterian minister.

“I was too young to have questions about the apocalyptic predictions 20 years ago,” Ha told the JoongAng Ilbo. “After the Oct. 28 Armageddon day passed without the second coming of Christ, I studied real theology out of repentance for what I did in 1992.”

In contrast to Lee and Ha, some former officials of the Dami Mission Church retain their faith in an imminent end of the world. Minister Jang Man-ho, who led the service in the Dami headquarters on Oct. 28, 1992, still argues in favor of apocalyptic theories.

“When VeriChips are installed inside people’s bodies during the next four years [between 2013 and 2016], doomsday will finally befall us,” said Jang in an interview with the JoongAng Ilbo.

VeriChips are human-implantable microchips approved by the U.S. Food and Drug Administration that hold identity information, medical records access and other data. Some believers in raptures or Armageddon argue that the chips match the description of the mark of the beast described in the Book of Revelation.

Some believe if U.S. President Barack Obama is re-elected next month and pushes ahead with his health care reforms, which they claim will mandate VeriChip implants, the end days will come in a few years.

“The arguments by those claiming VeriChips will lead to the end of the world arbitrarily interpret biblical teachings on no reasonable grounds,” said Professor Lee Seong-ho at Korea Theological Seminary. “The mandate for Verichip implants in the United States is also totally false.”

“The outbreak of World War III will occur next year and it will signal the beginning of the Last Days,” Lee said.

“Economic hard times can play a role in prompting people to succumb to apocalyptic theories, which they use as a means to relieve their anxieties,” said Chun Sang-chin, professor of sociology at Sogang University.