Pundits are weighing in on the escalating debate about economic democratization - a trendy campaign slogan - with just two months to go before the presidential election.

The three candidates have embraced the idea of curbing the power of the country’s family-owned businesses, with the cross-affiliate investments of the chaebol coming under particular attack. In an apparent appeal to populism, they have also trumpeted the need for more expansive welfare programs. 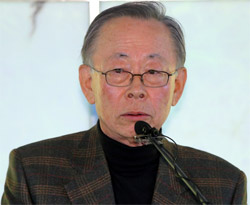 However, banning the controversial cross-shareholding practice could cause GDP to slide 2 percent, according to Korea University Prof. Oh Jung-guen. He made the comments at a forum held by the Korea Chamber of Commerce and Industry (KCCI) in Seoul yesterday.

Outlawing the practice would require large conglomerates to withdraw huge sums of money they have invested in their affiliates, incurring costs of at least 14.6 trillion won ($13.38 billion), Oh argued. The ramifications of such a move on the real economy could be extensive, he said, leading to a contraction in business investments and job cuts.

“If cross-shareholding is prohibited, the largest shareholders of conglomerates may lose stability in management as they will become more exposed to the risk of hostile mergers and acquisitions,” said the professor.

Yu Ji-soo, the dean of Kookmin University, said cross-shareholding is a common practice globally and not something that should be demonized.

“Top automakers like Renault-Nissan and Toyota were formed based on the cross-shareholding structure,” Yu said. Volkswagen and Ford give dominant shareholders greater voting power to help protect their ownership, he added.

“The owner-centered management of Korean automakers has its advantages, such as the swift execution of policies, and being able to make bold investments from a long-term perspective,” he said. “[Politicians] need to help create a business environment that can maximize these advantages.”

Moves to regulate the governance structure of local conglomerates should be aimed at cracking down on a limited number of shareholders whose greed compromises the interests of the majority, rather than banning the cross-shareholding practice itself, said Lee Sang-seung at Seoul National University.

At another forum by the Korea Economic Research Institute yesterday, Lee Hun-jai, former finance minister during the Roh Moo-hyun administration, called to stabilize the labor market and consumer prices, while also urging a fair distribution of income.

Lee is known as a mentor to independent presidential candidate Ahn Cheol-soo on economic policy.

“The current debate about economic democratization is overly focused on minor problems, including putting more regulations on chaebol,” Lee said. “But the first thing we need to do to achieve this is carry out the correct macroeconomic measures.”

“Amid increasing uncertainties in the global economy, it is important to be able to read global economic trends,” he said. “The government should abandon its growth-oriented economic policy and listen to the public and businesses.”

On the same day, Ahn visited the KCCI’s headquarters to meet business leaders and convey his campaign pledges. “Reforming the chaebol is just one small part of economic democratization,” he said. “The ultimate goal is to ensure that people can earn money on a fair basis.”

Ahn stressed the importance of protecting thousands of SMEs.