Alzheimer’s cases all but forgotten

Alzheimer’s cases all but forgotten 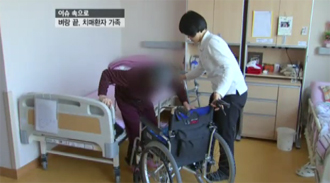 An elderly man devotedly took care of his wife suffering from Alzheimer’s disease for two years.

But as her symptoms of dementia worsened, the 78-year-old man, surnamed Lee, fell into depression and often contemplated suicide.

Jo physically and verbally assaulted him, throwing objects such as the TV remote control, cushions, clothes and hangers at him. Aggression and mood swings are symptoms of Alzheimer’s. Lee told police that he could not hold back his spontaneous burst of anger when she screamed at him, “I know you are cheating on me” and “You grew up with no parents so you know no better.”

He strangled her in their apartment in Yeongdeungpo District, western Seoul, on the evening of Oct. 19, according to the police.

Lee, who lost his parents at an early age, is an economics graduate of a top university and at one time was a board member at a construction company.

They lived with their 45-year-old son, daughter-in-law and grandson. After killing his wife, Lee immediately called his son and confessed to him, “I killed your mother.”

The son hurried back home to see his mother’s body on the living room floor and his father ready to jump off the apartment veranda - he quickly persuaded his father to turn himself over to the police.

The unfortunate turn of events is a reflection of the lack of proper support for elderly patients suffering from Alzheimer’s and other forms of dementia from their families, such as counseling and treatment.

There are currently some 534,000 patients suffering from dementia. The numbers are up from 421,000 in 2008, and the Ministry of Health and Welfare projects that the number of dementia patients will surpass 1 million by 2025, especially with the rapidly aging society.

But as of 2012, only 149,000 seniors are covered under the senior long-term care insurance, the rest are limited in their opportunities to access elderly nursing facilities or apply for visiting nurses or adult care centers.

Thus, three out of five of these dementia patients are taken care of by their families, according to the Health Ministry, with 40 percent by their spouses.

The Health Ministry in July announced that it will push for measures to help dementia patients and their families. There are still few that can receive benefits because of limited resources.

“If seniors with dementia use nursing facilities at least for the nighttime, the burden of the family will be greatly lifted and the speed at which the dementia progresses can be slowed down,” said Ihm Eul-gi, senior policy official at the Health Ministry. “While registering for senior long-term care insurance is a priority, even those who do not receive eligibility can take advantage of elderly care services offered by local governments and district offices.”

Lee testified to police that as he strangled his wife, he told her, “Let’s go together, dear. I love you, that’s why I am doing it.”