Around 570,000 households are at high risk of defaulting on their mortgage repayments as they already devote more than 60 percent of their monthly income to meeting these obligations, according to a report released by the financial authorities this week.

The total size of their outstanding mortgages amounts to 150 trillion won ($137.49 billion), showed the report by the Financial Services Commission (FSC) and the Korea Institute of Finance.

This is the first time the two bodies have done a stress tests on home-owners’ abilities to repay their house loans. They based their results on data provided by the Bank of Korea and Statistics Korea.

Previously, data on “house poor,” or those whose debts outweigh the value of their property, were only released by private financial institutions.

Of this group, 100,000 pose a severe risk of sinking underwater as they would not be able to pay off their mortgages, even if they were to liquidate all of their financial assets, including their property, the report showed.

It was created after critics questioned the accuracy of data supplied by private financial institutions due to the wide spread of their results, which showed there could be as few as 70,000 or as many as 1.98 million “house poor” in the country.

The latest report said that 569,000 households out of a total of 4.8 million bogged down by mortgages have seen their debt service ratio - the percentage of a borrower’s income used to pay off a loan - exceed 60 percent.

The total value of their outstanding repayments on their mortgages is equivalent to 30 percent of all mortgages taken out nationwide, or 149.5 trillion won of 516.7 trillion won.

Most of the high risk households are located in Seoul and its greater metropolitan area, and 352,000 are middle-class and either in their 40s or 50s, according to the FSC’s joint analysis.

“People in their 50s and 60s are also extremely vulnerable because many have taken out?loans that require them to pay a single lump sum of principal upon maturity,” said Kim Young-do, a research fellow at the institute.

“They are likely to struggle to make ends meet. If their economic condition worsens, or their property value falls, they could easily fall into a liquidity trap.” 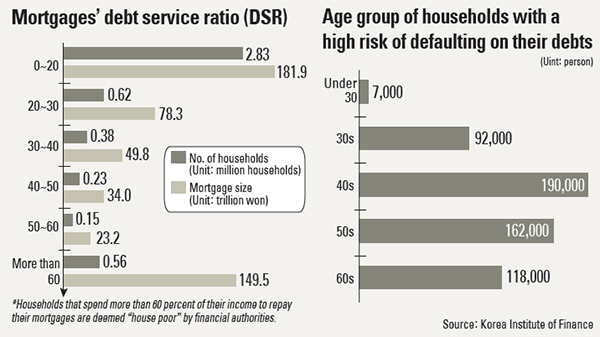 Average apartment values in Gwacheon saw the sharpest drop in the Greater Seoul area as they tumbled 25.7 percent from their peak, with the relocation of government departments to Sejeong City seen as the main cause. Suji District in Yongin, Gyeonggi, was the second area to see apartment prices fall significantly (24.1 percent) followed by Bundang (20.1 percent).

If housing prices drop by another 20 percent, the number of households deemed to be at severe risk of defaulting would jump by almost 50 percent to 147,000, causing lenders an estimated total loss of 16.6 trillion won, Kim added in the report.

“This wouldn’t be a problem for banks as their balance sheets are fairly sound, but non-banking depository institutions such as mutual savings banks are likely to go bankrupt in such an eventuality,” he said.

FSC Chairman Kim Seok-dong said the government does not need to step in - yet.

“Some 167,000 households have seen the value of their properties drop 10 percent since September, and 98,000 have taken out mortgages,” Kim said.

“But the country is not yet in a position that requires the government to inject public funds to address the issue. However, given that this could have a negative impact on the overall economy in the long term, the FSC will hammer out detailed contingency plans to prepare for a worst-case scenario.” 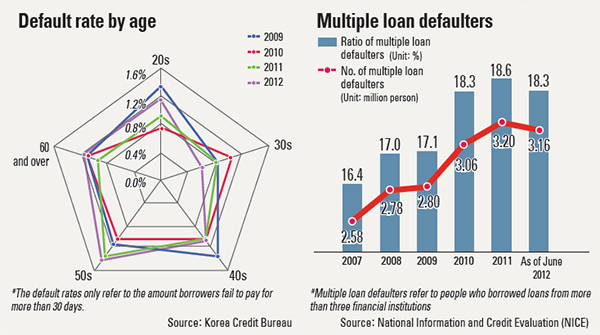 Meanwhile, the number of apartments put up for court auction is surging as more borrowers fall by the wayside.

According to Ggi Auction, a local real estate auctioneer, a total of 2,918 apartments in Seoul and its greater metropolitan area were put up for auction in October alone.

The auctioneer said this is a monthly record since it first compiled the data in 2001.