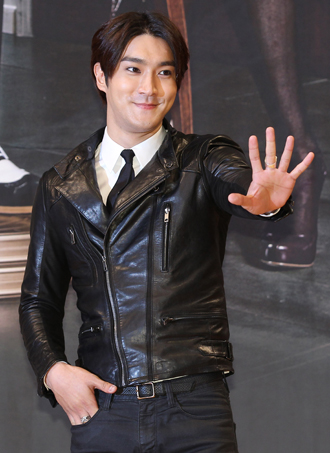 At a press conference for his new drama “The King of Dramas,” which took place on Oct. 31, the idol singer said that he took on the role in the upcoming SBS drama “to make people laugh.”

The Super Junior member who will play the role of an uppity super star named Kang Hyung-min said that he wanted to do away with his serious image by taking on a light-hearted character.

Siwon emphasized that his on-screen persona was a far cry from his real life self and that although the fictional character was a total brat, “you can’t help but like him because he’s so transparent.”

On the topic of himself, Siwon also answered the question on all fans’ minds: his attitude toward love.

“I’m open to meeting a lot of people, but when it comes to love, I’m cautious, again very different from Kang,” he said.

With romance aside, he maintained that he’d try his best to bring laughter to viewers in the new weekday drama starring Kim Myung-min and Jung Ryeo-won.

The program is set against the backdrop of the entertainment industry, and Kim will make his anticipated comeback playing the role of a money hungry producer while Jung will play the role of a writer equally obsessed with success.