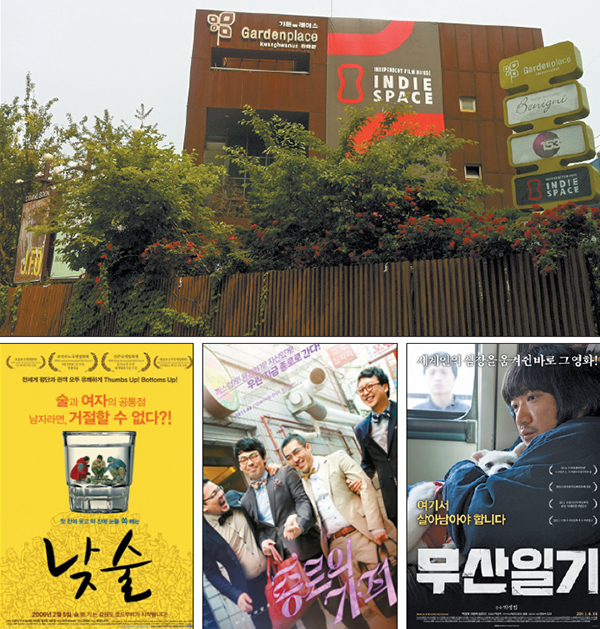 The Indie Space in Gwanghwamun, top photo, is gearing up to be a main window to well-known independent films such as the Daytime Drinking, Miracle on Jongno Street and the Journals of Musan, from left.

Directly managed by the Korean Film Council, the Indie Plus has tried to help people to get access to all kinds of genres of indie films, according to Huh Kyoung, a programmer at the Indie Space.

“We have hosted special showcases five or six times so far, but smaller-sized events have been held many times in between,” Huh said.

The Indie Space, located in Gwanghwamun, central Seoul, shares the same root with the Indie Plus, but when the former entity of the same name was salvaged by the Korean Film Council last year, a group of civic groups working for the expansion of independent film theaters founded their own indie film house.

The private indie film house, which opened in June, uses the same building known previously as the Miro Space next to the Seoul Museum of History, which used to screen independent movies and art films.

“We are preparing for interesting programs such as talk shows through which we could engage the audience more actively and talk about independent films together,” said Lee Hyun-hee, a civic activist working for the Indie Space.

“There are so many independent films being made these days and our priority is to introduce many of the films, of as many genres as possible, to the auidences.”

The 150-seat theater is now showing four independent films including the “Remembrance of MB” by Kim Jae-hwan, a satirical documentary of the President Lee Myung-bak.