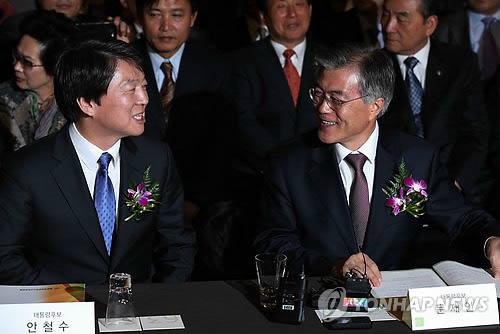 The main opposition Democratic United Party (DUP) on Friday called for a policy alliance with independent presidential rival Ahn Cheol-soo before talks begin in earnest to pick a single liberal candidate to compete in the December poll.

Lee Joung-woo, a senior official for the DUP presidential hopeful Moon Jae-in's election camp, said in a news conference that discussions are needed to forge a united vision for how the country should be run in the future.

"Such exchanges can take place separate from any talks on the single candidate issue," the chairman of the party's economic democratization committee said.

The economics professor-turned-advisor said joining forces on policy matters can show the public that the liberals can win power in the presidential race, and that both Moon and Ahn are serious about pushing forward sweeping political changes.

Lee said that the pledges made by the two candidates in such areas as job creation, conglomerate reforms, welfare, inter-Korean economic cooperation and welfare are not really different, with any differences being minor.

Rep. Kim Ki-sik also said that moving forward on a policy alliance as soon as possible could prevent important pledges, shared values and goals from being buried once single candidacy talks begin in earnest.

The calls follow a remark by Ahn last month that while he does not object to uniting the liberal camp's candidacy before the Dec. 18 poll, no such discussions should take place before Nov. 10, when his election camp plans to announce its campaign pledges to the public.

Moon is expected to announce his campaign goals the following day.

The DUP and Moon have been urging Ahn to hurry on the single candidacy issue because there is not enough time for the two sides to join forces.

All candidates must register with the National Election Commission on Nov. 25-26. After this, it becomes more complicated for a person to drop out of the race.

Most nationwide polls have shown that in a three-way-race, the liberals will lose to ruling conservative Saenuri Party candidate Park Geun-hye. If either Moon or Ahn steps down, the election outcome is hard to determine at present.

Related to talks between the DUP and independent candidates, Saenuri blasted the liberals for engaging in political collusion to win power at all costs.

Kim Moo-sung, the head of Saenuri's election strategy office, said both Moon and Ahn are trying to buy more time so they can avoid public scrutiny to see if they can run the country.

"They have no real experience in politics and can easily lead the country to ruin," he said.

The former lawmaker said the liberals engaged in a similar ploy to win power in the 2002 election, which resulted in Roh Moo-hyun becoming president. Roh, who committed suicide in May 2009, is an icon for liberals, but he was not popular towards the end of his administration, in particular with citizens dissatisfied with the economy.

Political pundits, meanwhile, said Ahn may be trying to delay holding talks on the single candidacy issue because time is on his side.

"If there is not a lot of time, the DUP cannot call for a primary election and will be forced to accept a nationwide poll to decide the critical matter," a source said.

Experts have said in a primary race, Moon may have the advantage, because he has the support of a party that can draw in supporters to vote, while Ahn could win if the selection is made through a poll. Ahn, who has the support of young people, has usually scored higher than Moon in local polls. (Yonhap)