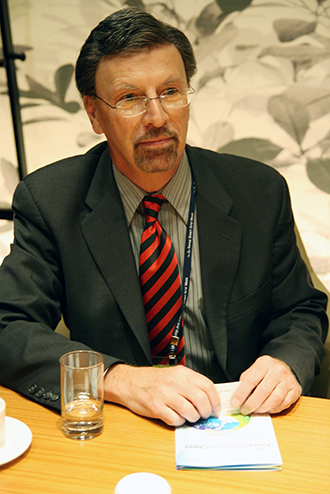 The wide-ranging economic slowdown could hamper the growth of the smart grid market by delaying projects, among other ramifications, according to Samuel C. Sciacca, a senior member of an organization that develops global standards for energy, power and other industries.

Pointing to the recent recession in the photovoltaic business, Sciacca, who works at the Institute of Electrical and Electronics Engineers (IEEE) Standards Association, said people may become more hesitant to use renewable energy, while smart grid-related projects may taper off.

Sciacca sat down for an interview with the Korea JoongAng Daily while visiting Seoul last week to attend Smart Grid Week, an event hosted by the Ministry of Knowledge Economy.

He said the utility market has been fortunate to escape largely unscathed from the global slowdown as most smart grid activity is focused on government-funded pilot projects, such as the Jeju Smart Grid Demonstration Project of Korea, the largest of its kind in the world.

“However, as these smart grid projects yield results and the time comes to implement the lessons and techniques learned on a widespread basis, I think that the world economy will certainly have some attenuating effect [on them],” he said.

“If economies remain uncertain, the consumers may be more hesitant to purchase electric vehicles or install photovoltaic panels on their homes,” he said. “New private business ventures in renewable energy and energy storage will have greater difficulty securing the funding they need to implement their plans.”

Despite years of efforts by governments around the world to promote smart grids, which use the latest technology to improve electricity delivery systems through greater automation, the public remains largely ignorant of what is happening, Sciacca said.

“Smart grid requires a smart community,” he said. “If we put all these technologies in place and do not educate people, then we will not achieve our goals.”

Germans have only recently started to recognize the importance of having a well-run smart grid as its government has decided to forgo nuclear power, Sciacca said, even though many people think the new technology will make power costs more expensive and power supply less reliable. “Educating people, especially in those areas like the U.S. and Korea, where so much power load comes from homes, is very important,” he said.

Sciacca pointed out that the focus of smart grid projects can be very different. Korea tends to concentrate on daily power usage, such as air-conditioning, while Europe focuses on green energy, he added.

As a senior member of the IEEE Standards Association, Sciacca stressed the importance of having accepted standards. “Standards allow us to create a technological approach, which can then be used in commercial technology, allowing products and ideas to flow back and forth,” he said. “They also improve efficiency, allowing that companies do not have to reinvent a new technology everywhere they go.”