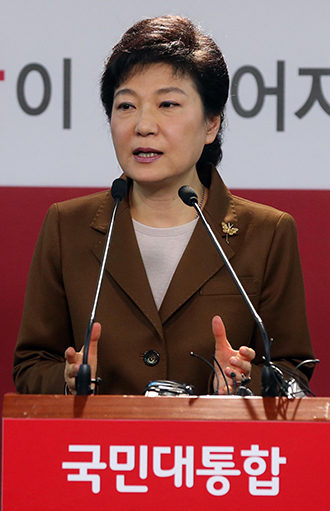 Park Geun-hye, the presidential candidate for the ruling Saenuri Party, said yesterday she is willing to meet with North Korean leader Kim Jong-un if doing so helps to improve inter-Korean relations.

“Trust [between the South and North] is needed to fundamentally resolve conflict on the peninsula,” Park said, yesterday, in a news conference that was held to outline her diplomacy, security and unification policies.

“And in order to build trust, diverse communication channels should be open [for the two countries] .?.?. I will meet with the North’s leader if it helps South-North relations.”

Yun Byung-se, head of the Park campaign’s foreign affairs and unification team, later elaborated that “Park isn’t interested in holding a summit simply to create an event” and that “she is open to meet [Kim Jong-un] anytime and anywhere, regardless of format.”

The 60-year-old candidate, currently competing against two liberal rivals, started off her address in the morning by stressing that she advocates sustainable peace, diplomatic trust and unification.

“I will definitely secure the country first,” Park said. “Furthermore, I will create sustainable peace [on the peninsula] based on trust and cooperation [with the North].”

The candidate also urged that “North Korea should give up its provocations and become a responsible member of the international society” and “It should also improve the quality of people’s lives by promoting economic development rather than nuclear development.” As for South Korea’s policies toward the North, Park said Seoul should have a “balanced approach” and its policies on North Korean affairs should “evolve.”

“We [South Korea] should depart from a dichotomous approach, choosing from either a soft-line or a hard-line policy, but rather seek a balance on North Korean policies,” she said. “We should make up for the flaws [of the past] while at the same time strengthen what we have gained.”

Park’s North Korean stance is seen as being somewhere in between the previous two governments’ soft-line approach under Kim Dae-jung and Roh Moo-hyun with their “Sunshine Policy” and the current President Lee Myung-bak’s principle-based approach.

Park also introduced her road map to unification, saying that Seoul should reach a small-scale merger with Pyongyang in the economic sector, which should then be followed by a broader political unity that can eventually lead to the two sides becoming one.

Park said she will establish a South-North exchange and cooperation center each in Seoul and Pyongyang to boost bilateral economic and social ties. The two centers would act as a tool to help build trust between the two countries.

“To help enhance the North’s economic independence, we will help Pyongyang expand its infrastructure such as electricity, transportation and telecommunications and also support [the North] in joining major international financial institutions and attract global investment,” Park said.

If she becomes president, Park also said she will establish a national security office that will act as a “control tower” in tackling issues related to diplomacy and defense in a consistent and efficient manner.

Park, meanwhile, was firm that there “will be no compromise on national security issues [with the North].”

“[Seoul] will not tolerate aggression along the Northern Limit Line [that acts as a de facto maritime border between the two Koreas], which has been defended with South Korean blood,” Park said.