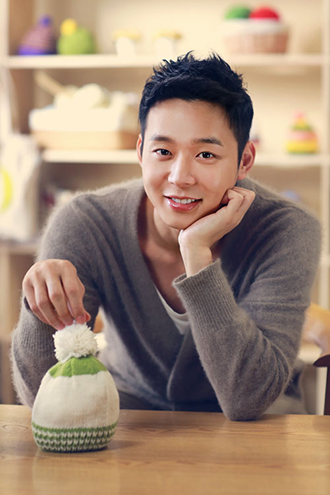 Park, who is behind the Hat Knitting Campaign, has recorded an online video tutorial for those who want to knit hats for infants in poverty-stricken areas around the world.

The tutorial featuring Park is an easy step-by-step guide, and Park said he was only too thrilled to get behind the good deed.

“I hope that through this campaign, children in Africa and Asia will be able to receive lots of life-saving hats,” said Park.

The campaign by the Save the Children organization began in 2007 and has delivered more than 560,000 hats to infants in Nepal, Bangladesh, Mali, Zambia and elsewhere. Participants knit hats, and the organization distributes them.

In addition to Park’s online tutorial, those who need extra help can attend an offline lesson on Nov. 24 at the charity organization’s office in Changjeon-dong, Mapo District, western Seoul.
By Carla Sunwoo