Final four ready for the last stages of ‘Superstar K’

Final four ready for the last stages of ‘Superstar K’ 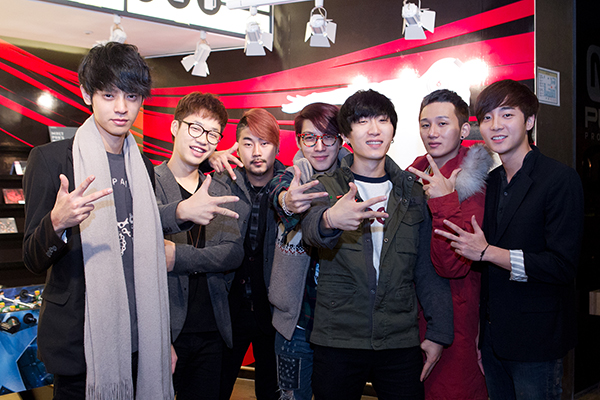 
Friday nights have had a different feel recently. People across Korea, especially young women, have been lured out of bars and clubs and into their living rooms to watch the live broadcast of Mnet’s fourth season of “Superstar K,” one of Korea’s many singing competition shows.

With the only remaining female contestant eliminated on Oct. 19, the show has become a testosterone-heavy affair, with each of the seven men charming enough to shake up the online preliminary voting overnight. The online vote accounts for 10 percent of a contestant’s score, with 60 percent coming from viewers’ texts and 30 percent from judges.

Tonight, when the final three will be decided at Peace Hall of Kyunghee University at 11 p.m., another contestant, or group, will be eliminated (one of the acts is a four-member band). He or they will lose the chance to win 500 million won ($460,000) in prize money as well as numerous benefits such as the opportunity to produce an album and music video.

Kim, who has received the highest rating in the preliminary vote through Mnet’s Web site as of yesterday with 28 percent, has been winning over the hearts of female viewers since the first episode. He not only has good looks but also a great voice, a wealthy family background (his father is said to be a CEO of a large makgeolli company known as Seoul Takju) and an impressive education (he was admitted to Georgetown University).

Although it seems as though Kim has faced no obstacles during his path to fame, he said it was difficult from the beginning as his parents wouldn’t approve of his passion for music. When Kim deferred his acceptance to Georgetown in order to participate in “Superstark K,” he said his parents were very disappointed.

His father only showed up to watch his son perform for the first time last week, while most of the other contestants’ parents have been present to cheer on their children from the beginning.

“I understand my father. If I were in his shoes, I would have also wanted to stop my son from pursuing a music career,” Kim said. “I was surprised to see my father in the audience last week. I guess I can take that as an approval of my decision.”

Ever since the live performance, Kim has been receiving compliments from the three judges - Lee Seung-cheol, Yoon Mi-rae and Yoon Gun, who replaced the busy Psy - for “making progress every round.” As of yesterday, Kim is the front-runner in preliminary voting with 114,965 votes, followed by Hong, Dickpunks and Jung.

If Kim doesn’t make a major mistake and continues to receive enough votes, he will remain the most promising contender.

“If I win, I will donate all the prize money to people who have musical talents but are in financially difficult situations,” Kim said.

Unlike Kim’s relaxed attitude, Jung, who has been depicted in the program as Kim’s rival, said he has to use the money to pay off his back rent.

“I called my landlady to say that I want to move out as I have to stay in the ‘Superstar K’ dormitory for a while, and she said I can’t because I have payments to make on the rent,” Jung said.

“If I win this competition, I will pay back all my debt and even buy the house,” Jung said with a laugh.

Jung has also grabbed the public’s attention from the beginning for being a 6-foot, 1-inch well-dressed man whose whimsical characteristics have even led the judges to admit he has the best qualities to become a star compared to the other contestants.

Jung’s popularity has allowed him to survive thus far, despite making several mistakes that gave him the lowest score from the judges. He received enough text message votes from the public to carry on.

Ever since the exposure through “Superstar K,” numerous articles have been posted online of Jung’s past career records working as a model and having close celebrity friends.

“I don’t know how people find the information,” he said. “I just did these jobs to earn money to continue with my passion for music.”

He too left his parents who were living abroad to come to Korea at a young age for music.

“Some people say that I worked in such areas to become a star, but I’m not interested in that. I did modeling and other broadcasting activities because they pay well. I just want to be a rocker. That’s it.”

Meanwhile, the only band, Dickpunks, a piano rock group without a guitarist, has been surviving through the stages by showing the audience that a rock band can perform various genres including girl group songs. They performed 4Minute’s “Muzik” last week.

“People may say that it is easier for us to stage a live performance because there are four of us, but actually it is very challenging as other contestants sing to the music played by the Super Band provided by the program, whereas we have to play our own music,” said Kim Tae-hyeon, 25, the vocalist.

“But I think this can also differentiate us from other contestants in terms of uniqueness. We must sound quite different, right?”

The final contestant, Hong, the oldest remaining artist, has been earning sympathy for his doleful voice and his experience busking on streets of Hongdae for the past five years. Growing up in a poor family, Hong also said that his mother begged him not to pursue music.

“I think I heard more than a thousand times from my mother not to pursue music. She begged me instead to learn a specialized skill to get a job at a small company and earn a living,” said a teary-eyed Hong. “But now, whenever I see her in the audience I feel so proud of myself.”

Hong said he would continue singing on the streets even if he won the competition.

“When you perform on stage, people come to listen to you sing. But when you sing on streets, people turn in their tracks to hear me sing. I feel great about that.”