Ahn would set up hotline between South and North

Ahn would set up hotline between South and North 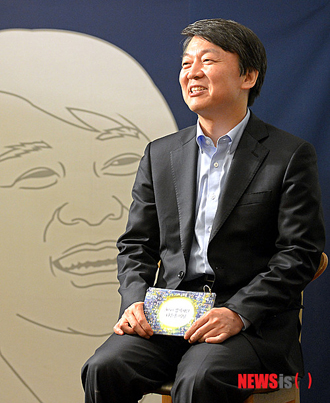 Independent presidential candidate Ahn Cheol-soo said yesterday that if elected president he would set up a hotline between the two leaders of South Korea and North Korea to enhance communication on the peninsula and also jointly establish a permanent dispute settlement body to help prevent major inter-Korean conflict.

“We live in an age of crisis,” Ahn said in a conference outlining his unification and foreign affairs policies at his campaign office in Gongpyeong-dong, Jongno District, central Seoul. “It’s been 20 years since the cold war ended at a global level but the Korean Peninsula still remains a cold-war island.”

He added that over the past five years, inter-Korean relations have been stalled completely and the North’s nuclear weapons issue hasn’t been resolved, and has deteriorated instead.

“Also, nationalism in South Korea, China and Japan has heightened, deepening the conflict,” Ahn said. “Though the Korean economy, which is currently the world’s 15th largest, is becoming a developed country, our diplomacy sector has remained at the developing level.”

The liberal candidate said that in order to create a new future and to overcome pending difficulties involving diplomacy and security, South Korea should start by establishing the peace that has been broken on the peninsula.

In particular, Ahn proposed setting up a direct hotline between the two leaders after negotiating the plan through a South-North ministerial meeting, which would eventually pave the way for a summit.

A permanent dispute settlement body would also help maintain peace in the West Sea and establish inter-Korean trust. Ahn also pledged to promote a four-way summit among the two Koreas, the United States and Japan for the sake of creating peace and to resume the six-party talks that aim for a peaceful resolution of Pyongyang’s nuclear weapons program.

On Monday, while announcing her policy outline, Park said she is willing to meet with North Korean leader Kim Jong-un if it would help improve inter-Korean relations.

She also emphasized “trust” between the South and North to fundamentally resolve conflict on the peninsula and to do that, she said diverse communication channels should be opened.