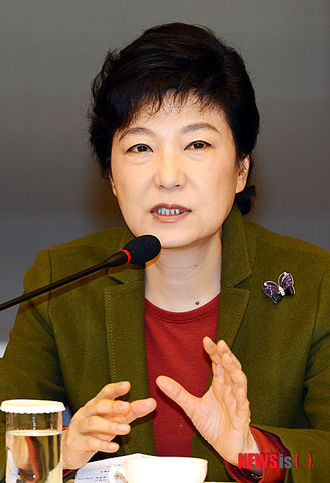 Ruling Saenuri Party presidential candidate Park Geun-hye yesterday made it clear that Dokdo belongs to South Korea and this issue is not negotiable.

In a meeting with foreign correspondents in Seoul, the five-term lawmaker, who wants to become the country’s first woman president, said the islets in the East Sea are historically, geographically and by international law part of the country.

She said it is important to know that Koreans think Japan’s claims to Dokdo started when it forcefully began taking control of the country in 1905.

“For the future progress of bilateral relations, it is important for Japan to realize this [view],” she said.

On the subjugation of Korean woman as sex slaves by the Japanese military during the abusive colonial period (1910-45), Park said the actions cannot be justified in any way.

The 60-year-old daughter of late President Park Chung Hee, who normalized diplomatic ties with Japan, said most of the women abused as sex slaves are now in their mid-80s, and pointed out that there is not much time left for Japan to make amends.

Park, who receives higher marks from voters in the areas of diplomacy and national defense compared to liberal rivals, also said while calls to sign a permanent peace treaty with North Korea exist, the process will take time. At present, only an armistice exists between the two sides that fought a bloody three-year war.

“Trust must come first before talks about a peace treaty can take place,” she said.

On the emergence of a new leadership in China and its impact, Park predicted a steady upgrade in relations.

The candidate, meanwhile, said she wants to transform the Korean Peninsula into a new frontier of peace and cooperation, and strive to seek unification with North Korea based on the full support of the people.

She added the goal of unification must be to bring happiness to people and promote peace and prosperity in Asia and the rest of the world.

The candidate said that if she is elected in the Dec. 19 poll, she will never permit a repeat of such incidents as the sinking of a South Korean warship or shelling of an island in the Yellow Sea, and demand that Pyongyang give up its nuclear ambitions once and for all.