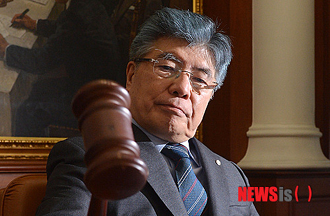 The central bank froze the key interest rate yesterday in a move seen as being aimed at assessing the impact of October’s rate cut on the slowing local economy amid the global downturn.

As widely expected, Bank of Korea Gov. Kim Choong-soo and other board members unanimously left the benchmark seven-day repo rate unchanged at 2.75 percent for November following a quarter-point rate cut the previous month. The BOK also lowered the rate in July.

The governor said downside risks to growth are deemed large due mainly to the euro zone debt crisis and a stalemate over coping with looming automatic tax hikes and spending cuts in the U.S.

“The local economy is not likely to further worsen, but it is too early to say that the economy will quickly recover,” Kim said at a press conference.

He said Korea needs to draw up contingency plans to cope with the fallout from the so-called fiscal cliff in the U.S. as the export-oriented Korean economy is heavily affected by the global economy.

Analysts said that the BOK opted for the freeze this month, as it would need the time to gauge the effects of the October rate cut on the slowing economy and the bank may resume the easing cycle early next year.

“There are some signs of marginal recovery in the U.S. and China. But the key rate is likely to stay at the current level for the time being as the Korean economy is losing ground,” said Yoon Yeo-sam, a fixed-income analyst at KDB Daewoo Securities.

“The possibility of a rate cut in the first quarter of next year lingers on given the deadlock over the U.S. fiscal cliff and a potential growth outlook downgrade for the Korean economy.”

The BOK’s move came on the heels of rate freezes made by central banks in Europe, Australia and Indonesia in November, as lingering economic uncertainty is conflicting with some stabilizing signs of the global economy.

In particular, economic policy uncertainty at home and abroad persists, largely stemming from political events. Korea’s presidential election is scheduled for Dec. 19, along with incoming new governments in the U.S. and China.

Korea’s growth is slowing down on weak exports and sluggish domestic demand. The local economy grew a mere 0.2 percent on-quarter in the third quarter, slowing from 0.3 percent in the second quarter.

Consumer inflation grew at the fastest pace in four months in October, but remained within the BOK’s 2-4 percent inflation target band.